Listening is Reading: An Audiobook Event 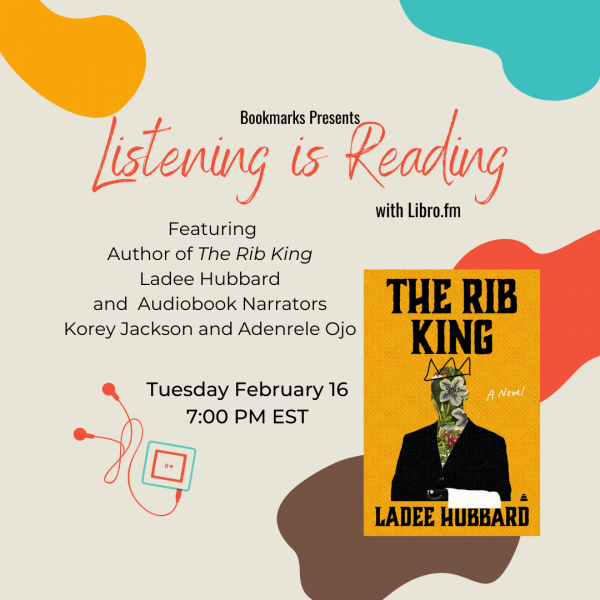 Join Bookmarks for Listening Is Reading. Learn all about audiobooks and the independent audiobook model from Libro.fm, a social purpose corporation that makes it possible to buy audiobooks through local bookstores. We will also be joined by Ladee Hubbard, author of The Rib King, who will be in conversation with the narrators of her audiobook, Korey Jackson and Adenrele Ojo.

This is a free event. To register, click here.

About Libro.fm:
Same audiobooks. Different story.
Libro.fm makes it possible for you to buy audiobooks through Bookmarks, giving you the power to keep money within your local economy, create jobs, and make a difference in your community. Whether you are paying for a monthly membership, giving an audiobook to a friend, or buying audiobooks for your organization, Libro.fm splits the profit from your purchases with your local bookstore.

About Ladee Hubbard:
Ladee Hubbard is the author of The Talented Ribkins, which received the 2018 Ernest J. Gaines Award for Literary Excellence and the Hurston/Wright Legacy Award for Debut Fiction. Her writing has appeared in Guernica, the Times Literary Supplement, Copper Nickel, and Callaloo. She received a 2016 Rona Jaffe Foundation Writers’ Award as well as fellowships from the MacDowell Colony, Art Omi, the Sacatar Foundation, the Sustainable Arts Foundation, Hedgebrook, and the Virginia Center for the Creative Arts. Born in Massachusetts and raised in the U.S. Virgin Islands and Florida, she currently lives in New Orleans with her husband and three children.

About The Rib King:
The acclaimed author of The Talented Ribkins deconstructs painful African American stereotypes and offers a fresh and searing critique on race, class, privilege, ambition, exploitation, and the seeds of rage in America in this intricately woven and masterfully executed historical novel, set in early the twentieth century that centers around the black servants of a down-on-its heels upper-class white family.

About Korey Jackson:
Korey Jackson, an Earphones Award-winning narrator, is an actor, known for his roles in the films 37, Life Itself, and Anesthesia. He earned his MFA in acting from New York University’s Tisch School of the Arts.

About Adenrele Ojo:
Adenrele Ojo is a native Philadelphian who was born in Brooklyn, New York, and currently resides in Los Angeles. First trained as a dancer as a little girl, she went on to study as a part of Philadanco’s Training Program; later she received her Bachelor of the Arts in theater from Hunter College in New York and honed her skills at the William Esper Studio, studying Meisner under the auspices of Maggie Flanigan.    Nominated for an L.A. Stage Alliance Ovation Award for Featured Actress in a Play for her role as Martha Pentecost in the Fountain Theater’s 2006 production of August Wilson’s Joe Turner’s Come and Gone, Adenrele Ojo, theatre brat (her dad, John E. Allen, Jr. was Founder & Artistic Director of Freedom Theatre, the oldest African American theater in Pennsylvania) is no stranger to the stage. In 2010 she performed in the Fountain Theatre’s production of The Ballad of Emmett Till by Ifa Bayeza, directed by Shirley Jo Finney, which won the 2010 L.A. Stage Alliance Ovation Award & the Los Angeles Drama Critics Award for Best Ensemble. Other plays include August Wilson’s Jitney and Freedom Theatre’s own Black Nativity (2007), where she played Mary.

The Rib King: A Novel (Hardcover)

Book Riot – Our Most Anticipated Releases of 2021