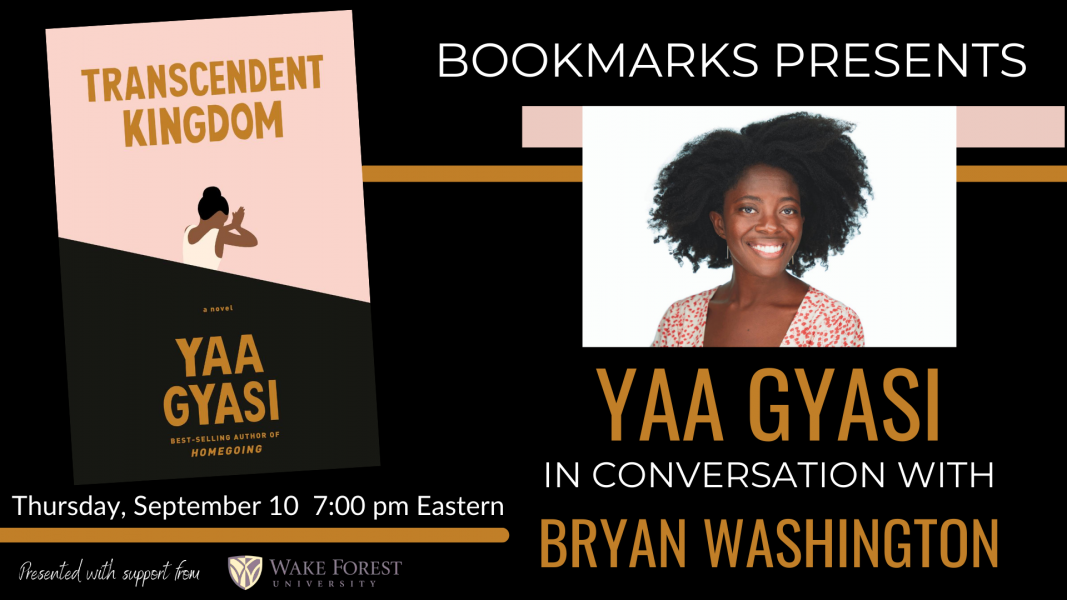 Bookmarks is honored to host Yaa Gyasi to discuss her sophomore novel, Transcendent Kingdom. Her debut, Homegoing, remains a Bookmarks bestseller, a perennial book club pick, and a staff favorite.

This event is presented with support from Wake Forest University.

This event will take place virtually on Crowdcast. There are three ways you can join this event:
1. Purchase a copy of Transcendent Kingdom below. A confirmation will be sent to you and you will be added to the event.
2. Join Bookmarks' Signed First Editions Club and join the event for free! Transcendent Kingdom is our September SFEC selection.
3. Make a donation to Bookmarks below. We understand that purchasing a hardcover book right now might be difficult, so a donation in any amount to our nonprofit is also welcome.

Yaa Gyasi will be in conversation with Bryan Washington. Bryan Washington is a National Book Award 5 Under 35 honoree, and winner of the Dylan Thomas Prize and the Ernest J. Gaines Award for Literary Excellence. His first book, the story collection Lot, was a finalist for the NBCC's John Leonard Prize, the PEN/Robert W. Bingham Prize, the Aspen Words Literary Prize, and the New York Public Library Young Lions Fiction Award. Lot was a New York Times Notable Book, one of Dwight Garner's top ten books of the year, and on best-of-the-year lists from Time, NPR, Vanity Fair, BuzzFeed, and many more. He has written for The New Yorker, The New York Times, The New York Times Magazine, BuzzFeed, Vulture, The Paris Review, McSweeney's Quarterly, Tin House, One Story, Bon Appétit, GQ, The Awl, and Catapult. He lives in Houston.

Gifty is a sixth-year PhD candidate in neuroscience at the Stanford University School of Medicine studying reward-seeking behavior in mice and the neural circuits of depression and addiction. Her brother, Nana, was a gifted high school athlete who died of a heroin overdose after an ankle injury left him hooked on OxyContin. Her suicidal mother is living in her bed. Gifty is determined to discover the scientific basis for the suffering she sees all around her. But even as she turns to the hard sciences to unlock the mystery of her family's loss, she finds herself hungering for her childhood faith and grappling with the evangelical church in which she was raised, whose promise of salvation remains as tantalizing as it is elusive. Transcendent Kingdom is a deeply moving portrait of a family of Ghanaian immigrants ravaged by depression and addiction and grief--a novel about faith, science, religion, love. Exquisitely written, emotionally searing, this is an exceptionally powerful follow-up to Gyasi's phenomenal debut.

About Yaa Gyasi:
YAA GYASI was born in Ghana and raised in Huntsville, Alabama. She holds a BA in English from Stanford University and an MFA from the Iowa Writers' Workshop, where she held a Dean's Graduate Research Fellowship. She lives in Brooklyn.

A NEW YORK TIMES NOTABLE BOOK OF THE YEAR