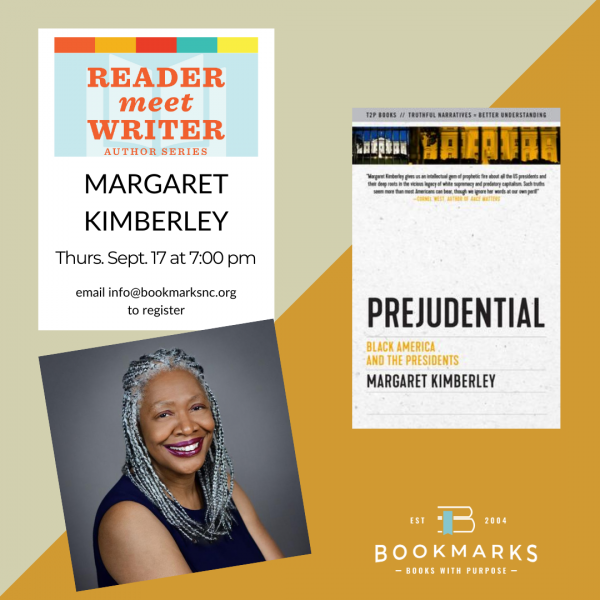 This is a series sponsored and run by SIBA - the Southern Independent Booksellers Alliance. Bookmarks is hosting some of these author events, but you can participate in any of their many other offerings by visiting another local southern independent bookstore that is participating.

Margaret Kimberley is a New York-based writer and activist for peace and justice issues. Dr. Cornel West has called her "one of the few great truth tellers who, along with Glen Ford, Adolph Reed, Jr. and Bruce Dixon, preserved her integrity during the Obama years." She has been an editor and senior columnist for Black Agenda Report since its inception in 2006. Her work has appeared in the Dallas Morning News, Consortium News, American Herald Tribune and CounterPunch. She is a contributor to the anthology In Defense of Julian Assange. She is a graduate of Williams College and lives in New York City.

PREJUDENTIAL is a concise, authoritative exploration of America's relationship with race and black Americans through the lens of the presidents who have been elected to represent all of its people.
Throughout the history of the United States, numerous presidents have left their legacies as slaveholders, bigots, and inciters of racial violence, but were the ones generally regarded as more sympathetic to the plight and interests of black Americans--such as Lincoln, FDR, and Clinton--really much better? And what of all the presidents whose relationship with black America is not even considered in the pages of most history books? Over the course of 45 chapters--one for each president--Margaret Kimberley enlightens and informs readers about the attitudes and actions of the highest elected official in the country. By casting sunlight on an aspect of American history that is largely overlooked, Prejudential aims to increase awareness in a manner that will facilitate discussion and understanding.

“This book is an effort to shed light on the truth. . . . To the extent that our leaders embody aspects of who we are as a people, studying how each president has participated in our nation’s complicated and often shameful treatment of black people is as good a place as any to start.”  — Margaret Kimberley from the Preface