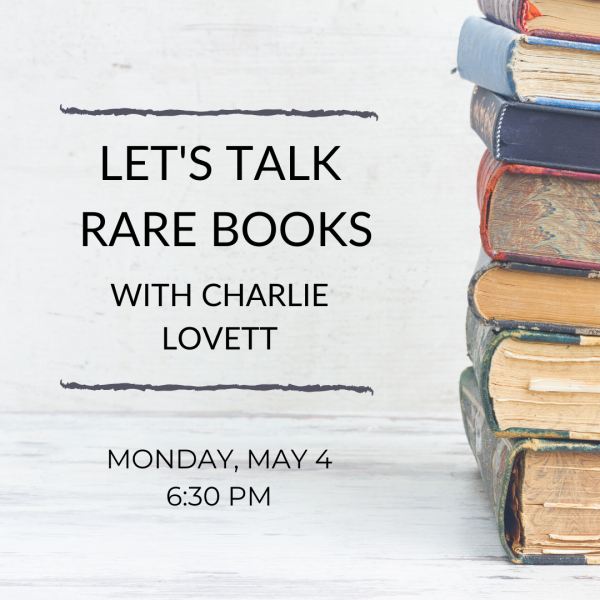 Join book collector and bestselling author Charlie Lovett as he discusses rare books! During this talk, Charlie will show you some of the books in his private collection as well as answer attendees' questions.

This is a pay-what-you-can event. Karl the Kraken knows we are facing tough times right now. So if you are able to purchase a copy of one of Charlie's books below, that would be great! But if you are not in a position to do so at the moment, feel free to pay what you can below.

About Charlie Lovett:
Charlie Lovett was born in Winston-Salem, NC and grew up as the child of a book-collecting English professor. He went into the antiquarian book business with his first wife, Stephanie, in 1984. About the same time he began to seriously collect books and other materials relating to Lewis Carroll, author of Alice’s Adventures in Wonderland. Lovett now has a large collection of Carrollian rare books and artifacts, including Carroll’s 1888 typewriter and one of six privately owned copies of the first edition of Alice in Wonderland. Lovett has written or edited nine books about Lewis Carroll, including Lewis Carroll: Formed by Faith, the first full length study of Carroll’s religious life (UVA Press, 2021). He has served as the president of the Lewis Carroll Society of North America, as editor of the London based Lewis Carroll Review, and has lectured on Carroll in the US and Europe at the Smithsonian Institution, Harvard University, UCLA, Oxford University, and elsewhere.

Lovett’s break-through as a fiction writer came when he combined two of his passions—rare books and the English countryside—to write the Shakespearean mystery The Bookman’s Tale (Viking/Penguin, 2013), a New York Times bestseller and Barnes and Noble Recommends selection which has been translated into several foreign languages. Parade Magazine called the book “[A] delightful tale of love and bibliophilia.” His next novel, First Impressions (Viking/Penguin, 2014) was another literary adventure, this one starring Jane Austen. People Magazine called it “a delightful novel that weaves together a modern love story and a literary mystery involving Jane Austen.”

In 2015 Lovett curated a major exhibition called Alice Live! at the New York Public Library for Performing Arts at Lincoln Center and wrote the introduction to the new Penguin Books edition of Alice in Wonderland. 2015 also saw the publication of his Christmas book, The Further Adventures of Ebenezer Scrooge (Viking/Penguin) which USA Today called “[a] clever, merry, and, yes, convincingly Dickensian reimagining of this Victorian tale.”

Lovett’s novel The Lost Book of the Grail (Viking/Penguin, 2017) is set in an English cathedral library, reaches through centuries of English history, and tells the story of bibliophile and Holy Grail enthusiast Arthur Prescott as he works to uncover a secret about the cathedral’s history. Bustle called it “The one book every bibliophile needs to read.”

Lovett’s most recent novel, Escaping Dreamland (Blackstone, 2020), is a book about four authors in New York City. Much of the book is set in the early 20th century, and explores not just historic New York, but the lives of three young people writing series books for children (think The Hardy Boys and Nancy Drew). The book is an homage to the books of our childhood, to New York City, and above all to love and friendship.

Lovett’s middle grade adventure, The Book of the Seven Spells (Month 9, 2021), about four children who discover a magical library, will come out in the spring and he is currently working on the second volume in that series.

Robert Parrish's childhood obsession with series books like the Hardy Boys and Tom Swift inspired him to become an author. Just as his debut novel becomes a bestseller, his relationship with his girlfriend, Rebecca, begins to fall apart.

The Lost Book of the Grail: A Novel (Paperback)

From the New York Times bestselling author of The Bookman’s Tale comes a new novel about an obsessive bibliophile’s quest through time to discover a missing manuscript, the unknown history of an English Cathedral, and the secret of the Holy Grail

A thrilling literary mystery costarring Jane Austen from the New York Times–bestselling author of The Bookman’s Tale. Charlie Lovett’s new book, The Lost Book of the Grail, is now available.

The Bookman's Tale: A Novel of Obsession (Paperback)

A mysterious portrait ignites an antiquarian bookseller’s search through time and the works of Shakespeare for his lost love. Charlie Lovett’s new book, The Lost Book of the Grail, is now available.