Lecture Night: John Prine - In Spite of Himself with Eddie Huffman 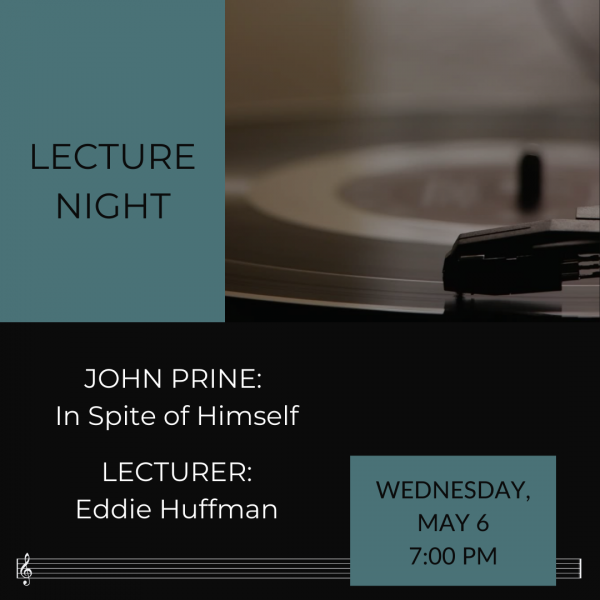 Join us for an online lecture night featuring Eddie Huffman discussing the life and work of John Prine. Eddie's book, John Prine: In Spite of Himself, will be the source material for his lecture. Attendees are encouraged to ask questions.

If you cannot afford a copy of Eddie's book at this time, please consider making a donation to Bookmarks below.

Registration is required for this event.

About the Book:
Many music fans know Bonnie Raitt’s “Angel from Montgomery,” the classic country music parody “You Never Even Called Me By My Name” (David Allen Coe), the chart-topping country hits “Love is On a Roll” (Don Williams) and “I Just Want To Dance with You” (George Strait), and the bluegrass standard “Paradise.” But they may not know those songs were all written by the same man: singer-songwriter John Prine.

John Prine: In Spite of Himself traces Prine’s slow ramble to his current status as a reluctant Nashville legend, cited as a favorite songwriter by such luminaries as Johnny Cash and Bob Dylan. (In fact, Prine had to shake off the “new Dylan” label en route to making a name for himself.) It traces his family roots in rural Kentucky, his 1950s boyhood in the Chicago suburbs, his discovery by Kris Kristofferson and Paul Anka after years as a mailman, and his subsequent encounters with Dylan, John Belushi, Bruce Springsteen, Dustin Hoffman, Phil Spector, Sam Phillips, John Mellencamp, Tom Petty, Billy Bob Thornton, and Andy Griffith.

About Eddie:
Eddie Huffman, a ninth- or tenth-generation North Carolinian, has been writing about music legends, muscle cars, obscenity trials, moonshiners, Civil War reenactors, and murderous ventriloquist dummies since before Lady Gaga was born. John Prine: In Spite of Himself is the first book he has written on his own. He has contributed to Rolling Stone, the New York Times, Utne Reader, All Music Guide, Goldmine, the Virgin Islands Source, and many other publications.

These days he writes about music regularly for two North Carolina newspapers, the Greensboro News & Record and the Winston-Salem Journal, as well as 1808 magazine. Eddie also writes computer code and is co-author of three computer instruction books and four screenplays.

He is the father of two fine young men, Sam and Rhett, the latter a professional musician in Atlanta. Eddie is an avid rail-trail rider, disc golfer, semi-professional photographer and videographer, and an occasional movie extra. He ate lunch with James Brown on Valentine’s Day and interviewed Marty Stuart while riding down I-85 in Ernest Tubb’s old tour bus. He once accused Rick Danko of using evasive interview techniques learned from Bob Dylan. (A gamble that paid off.) Eddie lives in Burlington, North Carolina.

John Prine: In Spite of Himself (American Music) (Paperback)