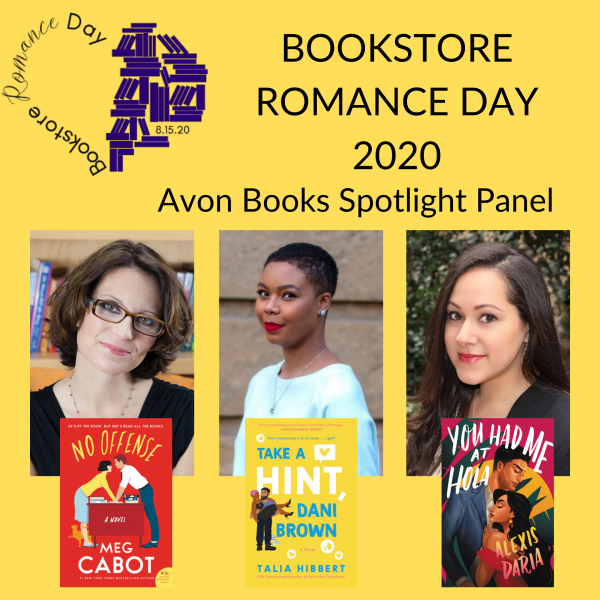 To attend, you must purchase a copy of one of the featured titles listed below.

About Meg Cabot:
Meg Cabot's many books for both adults and tweens/teens have included multiple global and #1 New York Times bestsellers, selling over twenty-five million copies worldwide. Her Princess Diaries series has been published in more than 38 countries and was made into several hit films by Disney. Meg is still waiting for her real parents, the king and queen, to restore her to her rightful throne. She currently lives in Key West, FL, with her husband and various cats.

About Meg Cabot's No Offense:
New York Times-bestselling author Meg Cabot returns with a charming romance between a children's librarian and the town sheriff in the second book in the Little Bridge Island series.

Welcome to Little Bridge, one of the smallest, most beautiful islands in the Florida Keys, home to sandy white beaches, salt-rimmed margaritas, and stunning sunsets--a place where nothing goes under the radar and love has a way of sneaking up when least expected...

A broken engagement only gave Molly Montgomery additional incentive to follow her dream job from the Colorado Rockies to the Florida Keys. Now, as Little Bridge Island Public Library's head of children's services, Molly hopes the messiest thing in her life will be her sticky-note covered desk. But fate--in the form of a newborn left in the restroom--has other ideas. So does the sheriff who comes to investigate the "abandonment". When John Hartwell folds all six-feet-three of himself into a tiny chair and insists that whoever left the baby is a criminal, Molly begs to differ and asks what he's doing about the Island's real crime wave (if thefts of items from homes that have been left unlocked could be called that). Not the best of starts, but the man's arrogance is almost as distracting as his blue eyes. Almost...

John would be pretty irritated if one of his deputies had a desk as disorderly as Molly's. Good thing she doesn't work for him, considering how attracted he is to her. Molly's lilting librarian voice makes even the saltiest remarks go down sweeter, which is bad as long as she's a witness but might be good once the case is solved--provided he hasn't gotten on her last nerve by then. Recently divorced, John has been having trouble adjusting to single life as well as single parenthood. But something in Molly's beautiful smile gives John hope that his old life on Little Bridge might suddenly hold new promise--if only they can get over their differences.

About Alexis Daria:
Alexis Daria is a native New Yorker and award-winning author writing stories about successful Latinx characters and their (occasionally messy) familias. Her debut TAKE THE LEAD won the 2018 RITA(R) Award for “Best First Book” and was one of the “Best Romance Novels of 2017” in The Washington Post and Entertainment Weekly. Her super powers include spotting celebrities in NYC, winning Broadway ticket lotteries, and live-tweeting.

About Alexis Daria's You Had Me at Hola:|
Leading Ladies do not end up on tabloid covers.

After a messy public breakup, soap opera darling Jasmine Lin Rodriguez finds her face splashed across the tabloids. When she returns to her hometown of New York City to film the starring role in a bilingual romantic comedy for the number one streaming service in the country, Jasmine figures her new "Leading Lady Plan" should be easy enough to follow--until a casting shake-up pairs her with telenovela hunk Ashton Suárez.

Leading Ladies don't need a man to be happy.

After his last telenovela character was killed off, Ashton is worried his career is dead as well. Joining this new cast as a last-minute addition will give him the chance to show off his acting chops to American audiences and ping the radar of Hollywood casting agents. To make it work, he'll need to generate smoking-hot on-screen chemistry with Jasmine. Easier said than done, especially when a disastrous first impression smothers the embers of whatever sexual heat they might have had.

Leading Ladies do not rebound with their new costars.

With their careers on the line, Jasmine and Ashton agree to rehearse in private. But rehearsal leads to kissing, and kissing leads to a behind-the-scenes romance worthy of a soap opera. While their on-screen performance improves, the media spotlight on Jasmine soon threatens to destroy her new image and expose Ashton's most closely guarded secret.

About Talia Hibbert:
USA Today and Wall Street Journal bestseller Talia Hibbert is a Black British author who lives in a bedroom full of books. Supposedly, there is a world beyond that room, but she has yet to drum up enough interest to investigate. She writes sexy, diverse romance because she believes that people of marginalised identities need honest and positive representation. Her interests include beauty, junk food, and unnecessary sarcasm.

About Talia Hibbert's Take a Hint, Dani Brown:
Danika Brown knows what she wants: professional success, academic renown, and an occasional roll in the hay to relieve all that career-driven tension. But romance? Been there, done that, burned the T-shirt. Romantic partners, whatever their gender, are a distraction at best and a drain at worst. So Dani asks the universe for the perfect friend-with-benefits--someone who knows the score and knows their way around the bedroom.

When big, brooding security guard Zafir Ansari rescues Dani from a workplace fire drill gone wrong, it's an obvious sign: PhD student Dani and former rugby player Zaf are destined to sleep together. But before she can explain that fact to him, a video of the heroic rescue goes viral. Suddenly, half the internet is shipping #DrRugbae--and Zaf is begging Dani to play along. Turns out his sports charity for kids could really use the publicity. Lying to help children? Who on earth would refuse?

Dani's plan is simple: fake a relationship in public, seduce Zaf behind the scenes. The trouble is, grumpy Zaf is secretly a hopeless romantic--and he's determined to corrupt Dani's stone-cold realism. Before long, he's tackling her fears into the dirt. But the former sports star has issues of his own, and the walls around his heart are as thick as his... um, thighs.

The easy lay Dani dreamed of is now more complex than her thesis. Has her wish backfired? Is her focus being tested? Or is the universe just waiting for her to take a hint?

New York Times-bestselling author Meg Cabot returns with a charming romance between a children's librarian and the town sheriff in the second book in the Little Bridge Island series.

You Had Me at Hola: A Novel (Paperback)

"I could not get enough of Jasmine and Ashton! I adored Jasmine--her ambition, her confidence, her attacks of self-doubt, and especially her hilarious, snarky, and loving cousins. She and Ashton have such a steamy, swoony, love story that I didn't want the book to end!"--Jasmine Guillory, New York Times bestselling author

As seen in OprahMag, Bustle, Parade, PopSugar, New York Post, Essence, Travel & Leisure, Ms. Magazine, TheSkimm, Betches, Shondaland, and Buzzfeed! Named one of the Best Books of the Year (so far) by Apple and Amazon.