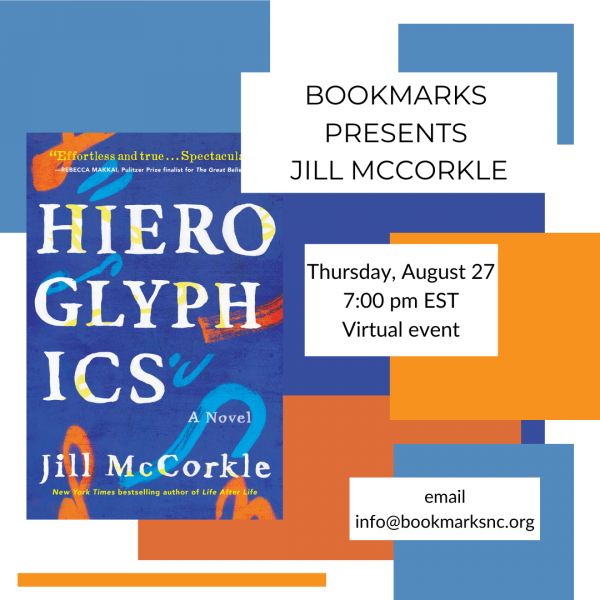 North Carolina author Jill McCorkle returns to Bookmarks -- virtually! Join us for a discussion with the author about her new novel Hieroglyphics, our July Signed First Editions Club Pick.

This is a pay-what-you-can event. Karl the Kraken knows we are facing tough times right now. So if you are able to purchase a copy of the book below, that would be great! But if you are not in a position to do so at the moment, feel free to pay what you can below.

If you are not a member of our SFEC, we encourage you to purchase a copy of Hieroglyphics below or make a donation to Bookmarks to receive the event link.

We are thrilled that author Michael Parker will be in conversation with Jill for this event!

Jill McCorkle's first two novels were released simultaneously when she was just out of college, and the New York Times called her "a born novelist." Since then, she has published six novels and four collections of short stories, and her work has appeared in Best American Short Stories several times, as well as The Norton Anthology of Short Fiction. Five of her books have been New York Times Notable books, and her most recent novel, Life After Life, was a New York Times bestseller. She has received the New England Booksellers Award, the John Dos Passos Prize for Excellence in Literature, and the North Carolina Award for Literature. She has written for the New York Times Book Review, the Washington Post, the Boston Globe, Garden and Gun, the Atlantic, and other publications. She was a Briggs-Copeland Lecturer in Fiction at Harvard, where she also chaired the department of creative writing. She is currently a faculty member of the Bennington College Writing Seminars and is affiliated with the MFA program at North Carolina State University.

"Hieroglyphics is a novel that tugs at the deepest places of the human soul--a beautiful, heart piercing meditation on life and death and the marks we leave on this world. It is the work of a wonderful writer at her finest and most profound."
--Jessica Shattuck, author of The Women in the Castle

A mesmerizing novel about the burden of secrets carried across generations.

Lil and Frank married young, launched into courtship when they bonded over how they both--suddenly, tragically-- lost a parent when they were children. Over time, their marriage grew and strengthened, with each still wishing for so much more understanding of the parents they'd lost prematurely.

Now, after many years in Boston, they've retired to North Carolina. There, Lil, determined to leave a history for their children, sifts through letters and notes and diary entries--perhaps revealing more secrets than Frank wants their children to know. Meanwhile, Frank has become obsessed with what might have been left behind at the house he lived in as a boy on the outskirts of town, where a young single mother, Shelley, is just trying to raise her son with some sense of normalcy. Frank's repeated visits to Shelley's house begin to trigger memories of her own family, memories that she'd hoped to keep buried. Because, after all, not all parents are ones you wish to remember.

Hieroglyphics reveals the difficulty of ever really knowing the intentions and dreams and secrets of the people who raised you. In her deeply layered and masterful novel, Jill McCorkle deconstructs and reconstructs what it means to be a father or a mother, and what it means to be a child piecing together the world around us, a child learning to make sense of the hieroglyphics of history and memory.

About Michael Parker:
Michael Parker is the author of six novels and three collections of stories. His short fiction and nonfiction have appeared in the Washington Post, the New York Times Magazine, the Oxford American, Runner’s World, Men’s Journal, and other publications. His work has been anthologized in The O. Henry Prize Stories and The Pushcart Prize. He is the Nicholas and Nancy Vacc Distinguished Professor in the MFA Writing Program at the University of North Carolina at Greensboro. He lives in Saxapahaw, North Carolina, and Austin, Texas.

About Michael Parker's Prairie Fever:
"Michael Parker has captured a time, place, and sisterhood so perfectly it hurts to turn the last page. A riveting, atmospheric dream of a novel." --Dominic Smith, author of The Last Painting of Sara de VosWinner of the 2020 Thomas Wolfe Prize

Longlisted for the Carnegie Medal for Excellence in Fiction

The Stewart sisters, pragmatic Lorena and chimerical Elise, are bound together not only by their isolation on the prairie of early 1900s Oklahoma, but also by their deep emotional reliance on each other. They're all they've got . . . until Gus McQueen arrives in Lone Wolf.An inexperienced first-time teacher, Gus is challenged by the sisters' wit and ingenuity. Then one impulsive decision and a cataclysmic blizzard trap Elise and her horse on the prairie--and the balance of everything is forever changed.With honesty, poetic intensity, and the deadpan humor of Paulette Jiles and Charles Portis, this novel tells the story of characters tested as much by life on the prairie as they are by their own churning hearts.

“Hieroglyphics is a novel that tugs at the deepest places of the human soul—a beautiful, heart-piercing meditation on life and death and the marks we leave on this world.

"Michael Parker has captured a time, place, and sisterhood so perfectly it hurts to turn the last page.