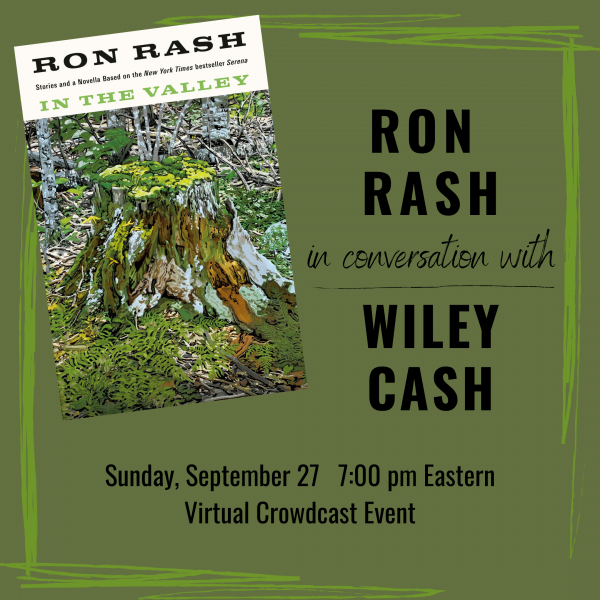 Originally scheduled for our 2020 Festival of Books & Authors, we’re excited to produce this event virtually! Ron Rash’s new book, In the Valley is a collection of stories and a novella based on his previous bestseller Serena. Wiley Cash’s books include The Last Ballad, This Dark Road to Mercy, and his bestselling debut A Land More Kind Than Home.

This is a pay-what-you-can event. Karl the Kraken knows we are facing tough times right now. So if you are able to purchase a copy of the book below, that would be great! But if you are not in a position to do so at the moment, feel free to pay what you can below.

About In the Valley:
From bestselling and award-winning writer Ron Rash ("One of the great American authors at work today."--The New York Times) comes a collection of ten searing stories and the return of the villainess who propelled Serena to national acclaim, in a long-awaited novella.

Ron Rash has long been a revered presence in the landscape of American letters. A virtuosic novelist, poet, and story writer, he evokes the beauty and brutality of the land, the relentless tension between past and present, and the unquenchable human desire to be a little bit better than circumstances would seem to allow (to paraphrase Faulkner). In these ten stories, Rash spins a haunting allegory of the times we live in--rampant capitalism, the severing of ties to the natural world in the relentless hunt for profit, the destruction of body and soul with pills meant to mute our pain--and yet within this world he illuminates acts of extraordinary decency and heroism. Two of the stories have already been singled out for accolades: "Baptism" was chosen by Roxane Gay for inclusion in The Best American Short Stories 2018, and "Neighbors" was selected by Jonathan Lethem for The Best American Mystery Stories 2019. And in revisiting Serena Pemberton, Rash updates his bestselling parable of greed run amok as his deliciously vindictive heroine returns to the North Carolina wilderness she left scarred and desecrated to make one final effort to kill the child that threatens all she has accomplished. "A gorgeous, brutal writer" (Richard Price) working at the height of his powers, Ron Rash has created another mesmerizing look at the imperfect world around us.

About Ron Rash:
RON RASH is the author of the PEN/Faulkner finalist and New York Times bestselling novel Serena, in addition to the critically acclaimed novels The Risen, Above the Waterfall, The Cove, One Foot in Eden, Saints at the River, and The World Made Straight; four collections of poems; and six collections of stories, among them Burning Bright, which won the 2010 Frank O'Connor International Short Story Award, Nothing Gold Can Stay, a New York Times bestseller, and Chemistry and Other Stories, which was a finalist for the 2007 PEN/Faulkner Award. Twice the recipient of the O. Henry Prize and winner of the 2019 Sidney Lanier Prize for Southern Literature, he is the Parris Distinguished Professor in Appalachian Cultural Studies at Western Carolina University and lives in Clemson, SC..

About Wiley Cash:
Wiley Cash is the award-winning and New York Times bestselling author of A Land More Kind Than Home and the acclaimed This Dark Road to Mercy. He won the SIBA Book Award and the Conroy Legacy Award, was a finalist for the PEN/Robert W. Bingham Prize, and has been nominated for many more awards. A native of North Carolina, he has held residency positions at Yaddo and the MacDowell Colony and is the writer in residence at the University of North Carolina Asheville. He lives in Wilmington, North Carolina with his wife and their two young daughters.

In the Valley: Stories and a Novella Based on SERENA (Hardcover)

Winner of the 2020 Thomas Robinson Prize for Southern Literature

The Last Ballad: A Novel (Paperback)

Winner of the Southern Book Prize for Literary Fiction

“Wiley Cash reveals the dignity and humanity of people asking for a fair shot in an unfair world.”