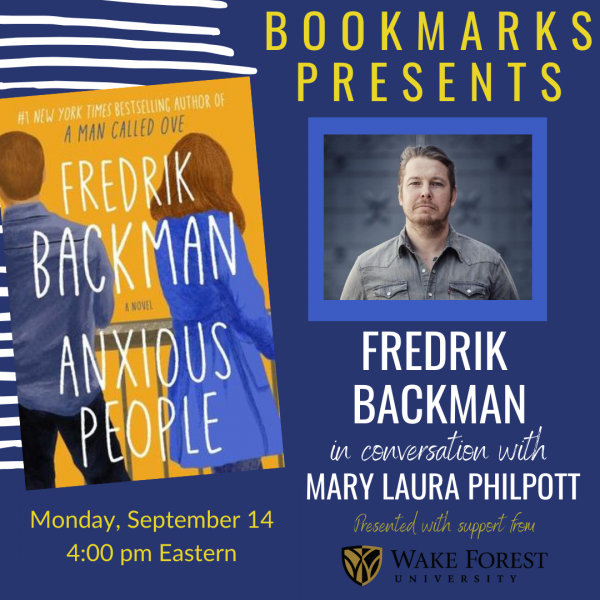 Fredrik Backman gained international fame with his breakout novel A Man Called Ove. This event will be broadcast live on Crowdcast and we are offering exclusive signed copies on a first-come-first-served basis. Please make a note of the Eastern time zone. This event is presented with support from Wake Forest University.

Attendance to this event is available to those who purchase a copy of Anxious People or make a donation to Bookmarks below.

Fredrik Backman will be in conversation with past Bookmarks Festival author, Mary Laura Philpott. Philpott writes essays that examine the overlap of the absurd and the profound in everyday life. Her writing has been featured by The New York Times; The Washington Post; Los Angeles Times; McSweeney ' s; The Paris Review; O, The Oprah Magazine; and other publications. She's the founding editor of Musing, the online magazine of Parnassus Books, as well as an Emmy Award-winning cohost of the literary interview show A Word on Words on Nashville Public Television. She also wrote and illustrated the humor book Penguins with People Problems, a quirky look at the embarrassments of being human. Her newest book is I Miss You When I Blink.

About Fredrik Backman:
Fredrik Backman is the #1 New York Times bestselling author of A Man Called Ove, My Grandmother Asked Me to Tell You She's Sorry, Britt-Marie Was Here, Beartown, Us Against You, and two novellas, And Every Morning the Way Home Gets Longer and Longer and The Deal of a Lifetime, as well as one work of nonfiction, Things My Son Needs to Know About the World. His books are published in more than forty countries. His next novel, Anxious People, will be published in September 2020. He lives in Stockholm, Sweden, with his wife and two children. Connect with him on Twitter @BackmanLand or on Instagram @Backmansk.

About Anxious People:
From the #1 New York Times bestselling author of A Man Called Ove and "writer of astonishing depth" (The Washington Times) comes a poignant, charming novel about a crime that never took place, a would-be bank robber who disappears into thin air, and eight extremely anxious strangers who find they have more in common than they ever imagined.

Looking at real estate isn't usually a life-or-death situation, but an apartment open house becomes just that when a failed bank robber bursts in and takes a group of strangers hostage. The captives include a recently retired couple who relentlessly hunt down fixer-uppers to avoid the painful truth that they can't fix their own marriage. There's a wealthy bank director who has been too busy to care about anyone else and a young couple who are about to have their first child but can't seem to agree on anything, from where they want to live to how they met in the first place. Add to the mix an eighty-seven-year-old woman who has lived long enough not to be afraid of someone waving a gun in her face, a flustered but still-ready-to-make-a-deal real estate agent, and a mystery man who has locked himself in the apartment's only bathroom, and you've got the worst group of hostages in the world.

Each of them carries a lifetime of grievances, hurts, secrets, and passions that are ready to boil over. None of them is entirely who they appear to be. And all of them--the bank robber included--desperately crave some sort of rescue. As the authorities and the media surround the premises these reluctant allies will reveal surprising truths about themselves and set in motion a chain of events so unexpected that even they can hardly explain what happens next.

Rich with Fredrik Backman's "pitch-perfect dialogue and an unparalleled understanding of human nature" ( Shelf Awareness), Anxious People is an ingeniously constructed story about the enduring power of friendship, forgiveness, and hope--the things that save us, even in the most anxious times.

A People Book of the Week, Book of the Month Club selection, and Best of Fall in Good Housekeeping, PopSugar, The Washington Post, New York Post, Shondaland, CNN, and more!

I Miss You When I Blink: Essays (Paperback)

A charmingly relatable and wise memoir-in-essays by acclaimed writer and bookseller Mary Laura Philpott, “the modern day reincarnation of…Nora Ephron, Erma Bombeck, Jean Kerr, and Laurie Colwin—all rolled into one” (The Washington Post), about what happened after she checke