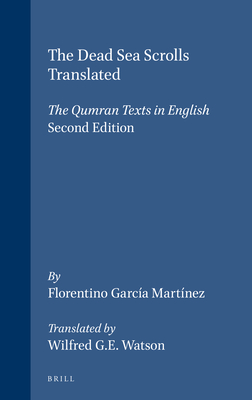 Offering the first comprehensive English translation of the non-biblical Qumran scrolls, "The Dead Sea Scrolls Translated" presents the largest collection of Qumran texts ever published in this language. Two-hundred of the total 625 manuscripts discovered can be found in this volume. (Those manuscripts omitted are either in such a fragmentary condition that translation would be meaningless, or are sufficiently modest in size that translation of them would add very little.) Thanks to the official publication, in 1993, of all the photographs of the Dead Sea Scrolls ("The Dead Sea Scrolls on Microfiche" by "Brill," Leiden and the Israel Antiquity Authority), it is now possible for the public to enjoy the same material available to the specialists. The 200 Dead Sea Scrolls translated here are a marked increase on the 62 previously published in the third edition of Geza Vermez's "The Dead Sea Scrolls in English," This increase is mainly possible due to the introduction of the fascinating 'new' texts, some of which, for example 4QMMT, are still awaiting official publication. "The Dead Sea Scrolls Translated" comprises an extensive preface outlining the origin of the manuscripts and the aims of the translation. This is followed by an introduction offering a survey of the discoveries and their publication, a brief sketch of the characteristics of the Qumran library, and several interesting remarks on the sect's identity, origins and history. The translation of the manuscripts is organized into nine chapters, each with one or two pages of introduction. It concludes with an exhaustive list of all manuscripts discovered at Qumran. This list has a double function. Firstly, it provides the readerwith accurate information of all the existing texts, biblical and non-biblical, published an not yet published. Secondly, it offers basic bibliographical references for the textual editions already available and for the publications which provide information on the texts not yet published. This list is a very useful reference tool and forms a scientific publication in its own right. Originally published in Spanish (1992) the present authorized translation has been prepared by Wilfred G.E. Watson of the University of Newcastle, a renowned scholar of Biblical Hebrew poetry. Please note that this title is available to customers in North America exclusively through Eerdmans Publishing Company (www.eerdmans.com).