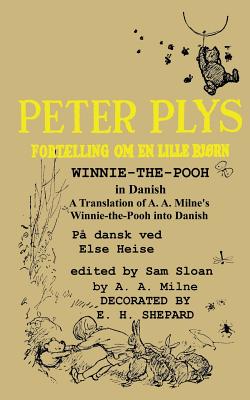 By A. A. Milne, Else Heise (Translator), Sam Sloan (Introduction by)
Email staff@bookmarksnc.org for price & availability

Winnie-the-Pooh is the most popular children's book in the world and in Denmark. Danish is a language read and spoken by five million people in Denmark and in Greenland and parts of northern Germany. This translation of this book into Danish is by Else Heise.

The purpose of this book is to help Danish speakers learn English and to help English speakers learn Danish. To have a translation as close as possible to the original is the most useful. The translator as given new names for the characters in the book. Winnie-the-Pooh is Peter Plys. The rabbit is Ninka Ninus. Christopher Robin is Jakob. Ishi Press has reprinted translations of Winnie-the-Pooh into 18 languages thus far. We have published it in Armenian, Bengali, Bulgarian, Chinese, Dutch, Esperanto, Finnish, German, Icelandic, Persian, Polish, Russian, Spanish, Hindi, Urdu, Khowar, Kalasha and Latin. This translation into Danish is part of project to translate Winnie-the-Pooh into other languages. The idea is children need to learn to read at an early age and the best way to teach them to read is to provide reading materials that they find interesting. Children around the world laugh when they see Winnie-the-Pooh saying and doing silly things. Since Winnie-the-Pooh is the most popular children's book world-wide, translating this book into the different languages of the world will be conducive to teaching children to read in those languages.