Gwynne's Grammar: The Ultimate Introduction to Grammar and the Writing of Good English (Paperback) 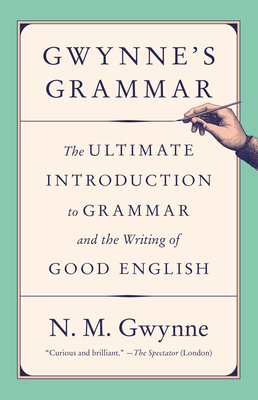 Anxious about apostrophes? In a pickle over pronouns and prepositions? Fear not—Mr. Gwynne is here with his wonderfully concise and highly enjoyable handbook. Within these witty, opinionated, and astonishingly useful pages, adults and children alike will find all they need to rediscover the neglected science of writing good English. Mr. Gwynne believes that happiness depends at least partly on good grammar—and Mr. Gwynne is never wrong.

Formerly a successful businessman, N. M. Gwynne has for many years been teaching just about every sort of subject to just about every sort of pupil in just about every sort of circumstance—English, Latin, Greek, French, German, mathematics, history, classical philosophy, natural medicine, the elements of music and “How to start up and run your own business”—in lecture-halls, large classrooms, small classrooms and homes—to pupils aged from two years old to over seventy—of many different nationalities and in several different countries—and since 2007 “face-to-face” over the Internet. English grammar has been the basis of many of the subjects he has taught.

His teaching methods are very much in accordance with the traditional, common-sense ones, refined over the centuries, that were used almost everywhere until they were abolished worldwide in the 1960s and subsequently. His teaching has been considered sufficiently remarkable—both in its unusualness in today’s world and in its genuinely speedy effectiveness—to have featured in newspaper and magazine articles and on television and radio programmes.

“Curious and brilliant.” —The Spectator

“[Gwynne] brings a bewitching zeal—and a defiantly old-fashioned approach—to the study of English grammar and usage. . . . Gwynne’s Grammar has its undeniable pleasures.” —The Boston Globe

“Unflinchingly, unapologetically rear-guard . . . with not the least wisp of dumbing-down. . . . His definitions—terse, logical, precise—are among the best things in the book.” —The Wall Street Journal

"A sprightly handbook . . . The examples are lively, the advice direct and confident. Some of it, once heard, won’t be forgotten. . . . Gwynne’s certainty is infectious.” —First Things

“Warm and utterly self-assured . . . Refreshingly opinionated . . . [Gwynne] is an unashamed prescriptivist . . . [and his] judgment is unambiguous . . . It doesn’t matter how many academic linguists tell us that language changes over time . . . Educated people still want to know whether they should write ‘amuck’ or ‘amok,’ ‘between’ or ‘among’.” —The Weekly Standard

“Dynamite to modern, child-centered education: a guide to the forgotten rudiments of the English Language.” —Daily Telegraph (UK)