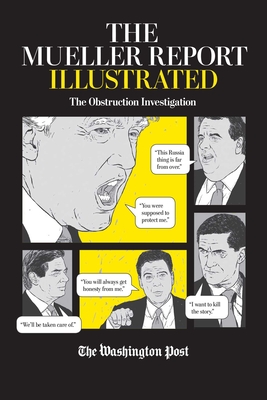 Written and designed by the staff of The Washington Post and illustrated by artist Jan Feindt, The Mueller Report Illustrated: The Obstruction Investigation brings to life the findings of special counsel Robert S. Mueller III in an engaging and illuminating presentation.

When it was released on April 18, 2019, Mueller’s report laid out two major conclusions: that Russia’s interference in the 2016 presidential election had been “sweeping and systematic” and that the evidence did not establish that Trump or his campaign had conspired with the Kremlin. The special counsel left one significant question unanswered: whether the president broke the law by trying to block the probe.

However, Mueller unspooled a dramatic narrative of an angry and anxious president trying to control the criminal investigation, even after he knew he was under scrutiny. Deep inside the 448-page report is a fly-on-the-wall account of the inner workings of the White House, remarkable in detail and drama. With dialogue taken directly from the report, The Mueller Report Illustrated is a vivid, factually rigorous narrative of a crucial period in Trump’s presidency that remains relevant to the turbulent events of today.

The Washington Post has built an unparalleled reputation in its coverage of American politics and related topics. The paper’s circulation, prominence, and influence continue to grow.

“Concise and catchy…Someone should have told Special Counsel Robert Mueller that his 448 page-report could have been in graphic form all along.” —Booklist, starred review

“If you didn't want to wade through the thick paperback of the Mueller Report, the illustrated version may be the boiled-down essence to read and see.” —Valdosta Daily Times

“The Washington Post serves up a lively, graphic version of the foundational document in the current presidential impeachment process…. Feindt has a straightforward editorial style of drawing that captures Trump’s every barking snarl and pouting snit. While the storyline is eminently faithful to Mueller’s more detailed documentation, the writers and artist bring drama to it by showing the many points of resistance within Trump’s staff.” —Kirkus Reviews