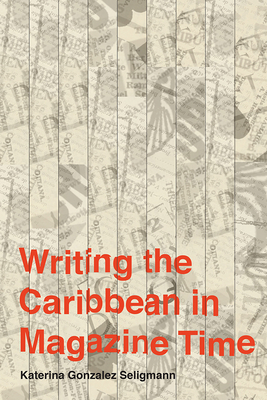 Writing the Caribbean in Magazine Time examines literary magazines generated during the 1940s that catapulted Caribbean literature into greater international circulation and contributed significantly to social, political, and aesthetic frameworks for decolonization, including Pan-Caribbean discourse. This book demonstrates the material, political, and aesthetic dimensions of Pan-Caribbean literary discourse in magazine texts by Suzanne and Aimé Césaire, Nicolás Guillén, José Lezama Lima, Alejo Carpentier, George Lamming, Derek Walcott and their contemporaries. Although local infrastructure for book production in the insular Caribbean was minimal throughout the twentieth century, books, largely produced abroad, have remained primary objects of inquiry for Caribbean intellectuals. The critical focus on books has obscured the canonical centrality of literary magazines to Caribbean literature, politics, and social theory. Up against the imperial Goliath of the global book industry, Caribbean literary magazines have waged a guerrilla pursuit for the terms of Caribbean representation.

KATERINA GONZALEZ SELIGMANN is an associate professor in the Department of Literatures, Cultures, & Languages at the University of Connecticut.

"Katerina Gonzalez Seligmann’s Writing the Caribbean in Magazine Time is a groundbreaking book from a rising star in Caribbean, decolonial, and ethnic studies. Shifting our attention from the emergence of big names to the exchange of small magazines, Gonzalez Seligmann invites us to the rethink much of our assumed knowledge about one of the world’s richest literary traditions."
— Frances Negrón-Muntaner

"Katerina Gonzalez Seligmann has given us an open window through which we can see the finer discursive details on the pages of those early literary magazines which constituted the vital foundations of the Caribbean literary tradition that today we know and love. A must read for all scholars and lovers of the Caribbean word!"
— Paget Henry