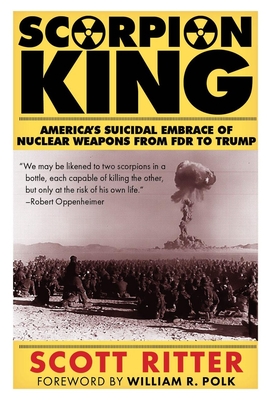 "We may be likened to two scorpions in a bottle, each capable of killing the other, but only at the risk of his own life." -- ROBERT OPPENHEIMER

Scorpion King: America's Suicidal Embrace of Nuclear Weapons from FDR to Trump is a history of America's corrosive affair with nuclear weapons, and the failed efforts to curb this radioactive ardor through arms control. The book's title refers to the allusion by Robert Oppenheimer, the father of the American atomic bomb, to dueling scorpions when discussing the deadly nuclear rivalry between the US and Soviet Union, and signals the dangers inherent in the resumption of the perilous US drive for nuclear supremacy.
Providing a vivid and gripping A-Z history of America's deceptive use of arms control as a means of actually furthering its quest for nuclear dominance, Ritter sheds light on a contradictory US agenda little understood by the lay reader, while providing sufficient detail and context to engage the specialist.
Originally published by Nation Books in 2010 under the title Dangerous Ground, this new version has been streamlined and significantly expanded to account for the failed arms control policies of the Obama administration, and the rejection of arms control as a policy during the first term of the Trump administration.
The Trump administration has pulled out of one landmark arms control treaty, the 1987 Intermediate Nuclear Forces treaty, and is threatening to let another, the 2010 New START treaty, expire. The terrifying Cuban missile crisis of 1962 demonstrated the apocalyptic folly of nuclear arsenals operating without limitation, and led to reciprocal constraints that moderated the nuclear ambitions of both the US and Soviet Union Those constraints, for the most part, no longer exist. The next missile crisis could prove terminal for humanity.
Scorpion King is a book that can, and should, occupy the shelves of academic libraries, diplomats and military professionals, as well as make the reading lists of concerned citizens, given the dangerous state of US and Russian relations, now hovering on the cusp of a new and increasingly hazardous nuclear arms race. It provides a road map showing how we collectively returned to the nuclear cliff edge, and shines light on the possibility of an exit from a seemingly endless dark tunnel.
Providing context for the forthcoming 2020 Review of the Non-Proliferation Treaty, Scorpion King is must reading for an imperiled world.