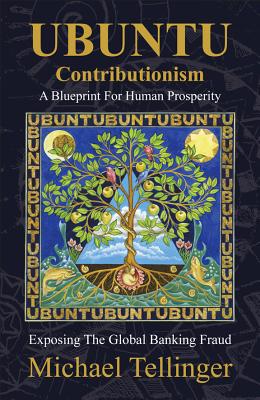 UBUNTU Contributionism - A Blueprint For Human Prosperity. The path that brought us here as a species is not only filled with lies and deception of unimaginable proportion, but also with continuous manipulation of the human race that goes back thousands of years - all controlled by money. Michael Tellinger has come full circle since his epic "Slave Species of god" in 2006, by proposing a blueprint for the emancipation of the slave species called humanity. Tellinger exposes the previously misunderstood origins of money and the rise of the royal banking elite that have controlled the world for millennia and continue to do so today through the modern banking families. He points out that money did not evolve from thousands of years of barter and trade, but that it was maliciously introduced to the human race as a tool of absolute control and enslavement. Tellinger makes a strong case that if we do not understand our human origins, we cannot come to terms with why the world is so messed up in the 21st century. He demonstrates that our current situation presents us with a unique opportunity to change the course of our destiny. Michael Tellinger describes how the ancient African philosophy of UBUNTU will allow us to seamlessly move from a divided, money-driven society, to united communities driven by people, their passion for life and their God-given talents. Coming to terms with our enslavement as a species is critical to discovering the path to full enlightenment. UBUNTU Contributionism presents a solid foundation for a new social structure to take us into a new era of true freedom from financial tyranny and real prosperity on every level of human endeavour. Find out about the UBUNTU Movement's plan of action called ONE SMALL TOWN - Will Change The World. Get involved and become a seed of consciousness and real change in your community www.ubuntuplanet.org.

Michael Tellinger is a scientist, explorer and internationally acclaimed author of numerous books, who has become an authority on the vanished civilisations of southern Africa and the origins of humankind. His discoveries of an advanced vanished civilisation in South Africa includes a diverse field of research and touches on human origins, spirituality, science, and consciousness. He has shown that long before the Egyptians saw the light of day, an advanced civilisation of humans lived in southern Africa, mining gold. They carved the first Horus bird, the first Sphinx, built the first pyramids and built an accurate stone calendar right in the heart of it all. Adam's Calendar is the flagship among millions of circular stone ruins, ancient channels, agricultural terraces and thousands of ancient mines left behind by a vanished civilisation unknown to us before, which we now call the FIRST PEOPLE. Michael has revealed evidence that these people had an astute knowledge of the laws of nature and the generation of FREE ENERGY using the power of sound from the Earth as a source of this energy. His discoveries have resulted in his close involvement with the Global Breakthrough Energy Movement, and his research has caught the attention of many scientist and inventors around the world. Michael's work touches critical issues around the subject of Unity Consciousness. He believes that quantum physics is a gift from the divine creator to allow humanity to find its way back to source - back to unity - from a deeply divided and manipulated species. Tellinger claims that only by understanding our mysterious past, the origins of money and the rise of the royal bloodlines, can we make sense of the insane world we live in today. It was his intimate understanding of our ancient past that allowed him to postulate a whole new way forward for humanity - something that has never been done before. A model for a new social structure which he called CONTRIBUTIONISM. Michael Tellinger is the founder of the UBUNTU LIBERATION MOVEMENT and the UBUNTU political party in South Africa - which will be contesting the national elections in SA during 2014. All the income generated from this book goes directly into building UBUNTU communities in South Africa and the rest of the world. For more information about the UBUNTU Liberation Movement please visit the website. www.ubuntuparty.org.za - view the home page and the New Freedom Charter. Michael's website is www.michaeltellinger.com