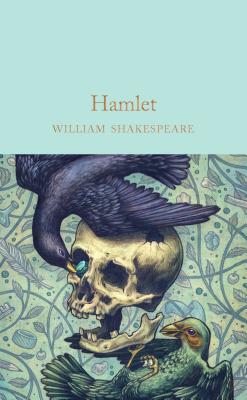 Some say Hamlet, the character, is “everyman.” Others say Hamlet is not everyman but a prince with concerns outside of what the average person has. Of course, the answer is somewhere in between. But you don’t have to be a royal to experience inner demons that make it difficult to portray an “acceptable” public persona. And you certainly don’t have to be royal to experience sudden alienating familial conflict that creates struggles around loyalty, obligation, love, and betrayal. Hamlet’s eloquence is surpassed only by the eloquence of Shakespeare himself. The play’s verse (and prose) serve to create depth of character and emotion, but the language itself has a life of its own that is unmatched in literature. This, the greatest of Shakespeare's plays, and arguably of all plays, is more than worth every first and subsequent read!

Shakespeare’s combination of violence, introspection, dark humour and rich language in Hamlet is intoxicating. It remains the world's most widely studied and performed play, and is a cornerstone of world literature.

Part of the Macmillan Collector’s Library; a series of stunning, clothbound, pocket sized classics with gold foiled edges and ribbon markers. These beautiful books make perfect gifts or a treat for any book lover. This edition is illustrated throughout by renowned artist Sir John Gilbert and includes an introduction by Dr Robert Mighall.

A young prince meets with his father's ghost, who alleges that his own brother, now married to his widow, murdered him. The prince devises a scheme to test the truth of the ghost's accusation, feigning wild madness while plotting a brutal revenge until his apparent insanity begins to wreak havoc on innocent and guilty alike.

William Shakespeare was born in Stratford-upon-Avon, Warwickshire, in 1564. The date of his birth is not known but is traditionally 23 April, St George's Day. Aged 18, he married a Stratford farmer's daughter, Anne Hathaway. They had three children. Around 1585 William joined an acting troupe on tour in Stratford from London, and thereafter spent much of his life in the capital. A member of the leading theatre group in London, the Chamberlain's Men, which built the Globe Theatre and frequently performed in front of Queen Elizabeth I, Shakespeare wrote 36 plays and much poetry besides. He died in 1616.