China in One Village: The Story of One Town and the Changing World (Hardcover) 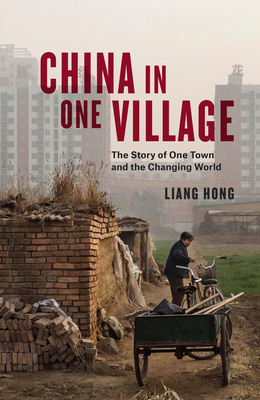 A global future in the history of a single village

After a decade away from her ancestral family village, during which she became a writer and literary scholar in Beijing, Liang Hong started visiting her rural hometown in landlocked Henan Province. What she found was an extended family riven by the seismic changes in Chinese society and a village turned inside out by emigration, neglect, and environmental despoliation. Combining family memoir, literary observation, and social commentary, Liang’s by turns lyrically poetic and movingly raw investigation into the fate of her village became a bestselling book in China and brought her fame.

For many months, Liang walked the roads and fields of her village, recording the stories of her relatives—especially her irascible, unforgettable father—and talking to everyone from high government officials to the lowest of village outcasts. Across China, many saw in Liang’s riveting interviews with family members and childhood acquaintances a mirror of their own lives, and her observations about the way the greatest rural-to-urban migration of modern times has twisted the country resonated deeply. China in One Village tells the story of contemporary China through one clear-eyed, literary observer, one family, and one village.

A Professor of Chinese literature at Renmin University in Beijing, Liang Hong has a literary career that has spanned criticism, reportage, and fiction. She is known for her scholarly research on twentieth-century Chinese literature, but true fame came to her with the publication of China in One Village. It was followed in 2013 by Leaving Liang Village. Since then, Liang Hong has been the recipient of many awards and honors. More recently, she has published a collection of short stories, The Sacred Clan, and two novels, The Light of Liang Guangzheng and Four Forms.

“In an essayistic voice of great grace, we are shown a most shocking and distressing Chinese reality. Amid the cruelty of a collapsing rural village, we feel the encroachment of the city, and of desire. This is an uncommonly beautiful work of field research; reportage of a different order; a theoretical window that provides penetrating insight into the country. Here one may lay a finger on the heart of China, on the heart of literature.”
—Yan Lianke, author of Three Brothers

“Liang Hong is an author with ‘wide-open senses.’ She captures detail the way a musician might know an instrument’s timbre from the briefest snatch of music. As she enters into daily life, she is able to capture the slightest details, to isolate and record them.”
—Jia Zhangke, director of Ash Is Purest White

“China in One Village is a post-socialist version of The Return of the Native. It chronicles the changes and continuities, and hopes and despairs, of rural Chinese society as it weathers the challenges of the market economy, a disenfranchised social structure, and monolithic politics. Liang Hong has provided a compelling portrait of grassroots China today: its sadness, its resilience, its haunting memories, and its contested prospects.”
—David Der-Wei Wang, author of Why Fiction Matters in Contemporary China

“An engaging read, with lively first-person narratives … it is in these stories that the universality of people’s hopes, fears and frustrations really shines through.”
—New Internationalist

“A lucid, accessible account of rural Chinese life, its stories worth far more than the statistics usually invoked in accounts of the profound change that has swept China.”
—Jonathan Chatwin, South China Morning Post

“Stunningly insightful … What makes Liang’s study so compelling is the way in which it offers a glimpse of a world in which personal problems … exist on the same level as broader social and political problems.”
—Mark Rappolt, ArtReview

“Overburdened grandparents, children who don’t see their parents, workers straining to make a living in unwelcoming cities: Liang Hong’s book, ‘China in One Village’ (tr. Emily Goedde), gives a platform for these voices from the countryside.”
—Mike Cormack, SupChina

“The immediacy of China in One Village brings to life how China is changing in a way that more academic works cannot do.”
—rs21

“Fair-minded and sanguine … one of the clearest narrative accounts of China’s countryside available in English.”
—Amy Hawkins, Times Literary Supplement