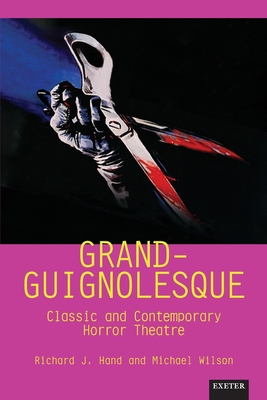 While the infamous Th tre du Grand-Guignol in Paris closed its doors in 1962, the particular form of horror theatre it spawned lives on and has, moreover, witnessed something of a resurgence over the past twenty years. During its heyday it inspired many imitators, though none quite as successful as the Montmartre-based original. In more recent times, new Grand-Guignol companies the world over have emerged to reimagine the form for a new generation of audiences. This book, the fourth volume in University of Exeter Press's series on the Grand-Guignol by Richard J. Hand and Michael Wilson, examines the ongoing influence and legacy of the Th tre du Grand-Guignol through an appraisal of its contemporary imitators and modern reincarnations.

As with the previous volumes, Grand-Guignolesque consists of a lengthy critical introduction followed by a series of previously unpublished scripts, each with its own contextualizing preface. The effect thereof is to map the evolution of horror theatre over the past 120 years, asking where the influence of the Grand-Guignol is most visible today, and what might account for its recent resurgence. This book will be of interest not only to the drama student, theatre historian and scholar of popular theatre, but also to the theatre practitioner, theatregoer and horror fan.