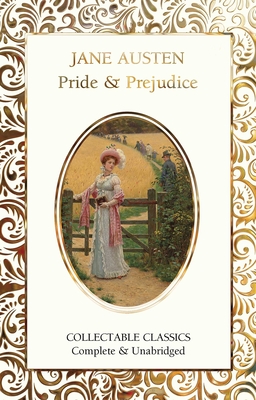 Little treasures, the FLAME TREE COLLECTABLE CLASSICS are chosen to create a delightful and timeless home library. Each stunning, gift edition features deluxe cover treatments, ribbon markers, luxury endpapers and gilded edges. The unabridged text is accompanied by a Glossary of Victorian and Literary terms produced for the modern reader.

One of the finest examples of literature, written by an author at the height her powers, Pride and Prejudice is sharply observed, witty and acute. It is studied and enjoyed in still increasing numbers throughout the world today.

Elizabeth Bennet and her four sisters are unmarried, much to their parents' great anxiety. In a rollercoaster of social etiquette, wilful misunderstanding and romantic intrigue Mr Charles Bingley and his friend Mr Darcy vie with Mr Collins and Mr Wickham for the attentions of the Bennet daughters. Rejection, scandal and distress eventually lead to marriage and true love in a series of classic happy endings resolving the conflicts between pride and prejudice in the sisters and their beaus.

In the history of literature, few female authors have attained the enduring popularity of Jane Austen (1775–1817). The substance of her work, and the source of her appeal, is quintessentially English. She takes the reader into the subtle cultural, linguistic and romantic codes of nineteenth-century English society, and in doing so creates some of literature’s favourite heroes and heroines.

Judith John is a writer and editor specializing in literature and history. A former secondary school English Language and Literature teacher, she has subsequently worked as an editor on major educational projects, including English A: Literature for the Pearson International Baccalaureate series. Judith’s major research interests include Romantic and Gothic literature, and Renaissance drama.