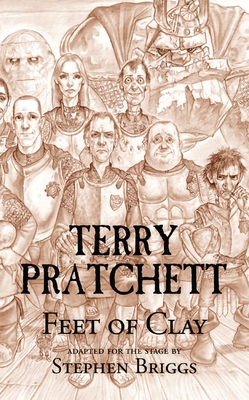 For Commander Vimes, Head of Ankh-Morpork City Watch, life consists of troubling times, linked together by, well, more troubling times. People are being murdered, but there's no trace of anything alive having been at the crime scene. So Vimes not only has to find out whodunit, but howdunit too. He's not even sure what they dun. But he wants answers.

Sir Terry Pratchett is the acclaimed creator of the global bestselling Discworld series, the first of which, The Colour of Magic, was published in 1983. In all, he is the author of fifty bestselling books. His novels have been widely adapted for stage and screen, and he is the winner of multiple prizes, including the Carnegie Medal, as well as being awarded a knighthood for services to literature. Worldwide sales of his books now stand at 70 million, and they have been translated into thirty-seven languages. Stephen Briggs is a British writer of subsidiary works and merchandise surrounding Terry Pratchett's comic fantasy Discworld. The Streets of Ankh-Morpork, the first Discworld map, was co-designed by Briggs and Pratchett and painted by Stephen Player in 1993. The Discworld Mapp, A Tourist Guide to Lancre and Death's Domain followed. The Discworld Companion, published in 1995 with updated editions in 1998 and 2003, is derived from Briggs' database of Discworld information. In 2007 Briggs published Wit and Wisdom of Discworld, a compilation of quotes from the Discworld novels. He also collaborated with Pratchett in the books The Discworld Diaries and Nanny Ogg's Cookbook. Briggs has also recorded audiobook versions of certain Discworld works, in editions released by Isis Publishing and by HarperCollins in the US.