The Devil and the Dark Water (Hardcover) 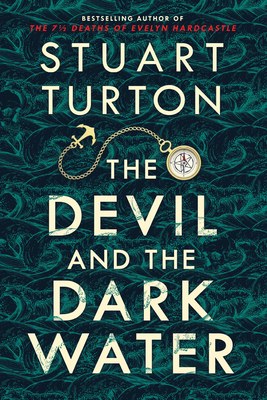 A murder on the high seas. A remarkable detective duo. A demon who may or may not exist.

It's 1634, and Samuel Pipps, the world's greatest detective, is being transported to Amsterdam to be executed for a crime he may, or may not, have committed. Traveling with him is his loyal bodyguard, Arent Hayes, who is determined to prove his friend innocent. Among the other guests is Sara Wessel, a noblewoman with a secret.

But no sooner is their ship out to sea than devilry begins to blight the voyage. A strange symbol appears on the sail. A dead leper stalks the decks. Livestock dies in the night.

And then the passengers hear a terrible voice, whispering to them in the darkness, promising three unholy miracles, followed by a slaughter. First an impossible pursuit. Second an impossible theft. And third an impossible murder.

Could a demon be responsible for their misfortunes?

With Pipps imprisoned, only Arent and Sara can solve a mystery that stretches back into their past and now threatens to sink the ship, killing everybody on board.

STUART TURTON is a freelance journalist who lives in West London with his wife. Stuart is not to be trusted—in the nicest possible way. The 7½ Deaths of Evelyn Hardcastle is his first novel.

Named a Best Book of 2020 by The Guardian, Daily Mail, Financial Times, The Independent, Publishers Weekly, and more.

""Compulsively readable...Perfect for readers who like a little occult with their mystery."" — The New York Times Book Review

"If you read one book this year, make sure it’s this one." — Daily Mail

"The locked room murder meets a Michael Bay movie, by way of Treasure Island; you can’t know what’s going on, if only because the author won’t let you know until he’s delivered the final surprise – and another one after that. The effect is irresistible." — The Guardian

"And unlike most whodunits I wouldn’t recommend it for pre-lights-out reading – not just because of the spooky bits, but because such a lovingly complex construct needs readers who are fully awake." — The Sunday Telegraph

"Turton has a fantastic time laying out the details of his intricate plot, leaving the reader wondering if it is something human or supernatural causing the devilry on the Saardam." — The Observer New Review

[An] outstanding whodunit... Fans of impossible crime fiction won’t want to miss this one.

"Nothing short of thrilling and spellbinding." — The Strand Magazine

"The Devil and the Dark Water is mind-bending, genre-bending, intricate, vivid, intelligent, and with one of the most gloriously grizzly cast of characters ever. An absolute razztwizzler of a novel." — Ali Land, author of Good Me, Bad Me

"An absolute treat from the most original voice in crime fiction." — Ragnar Jónasson, international bestselling author of Snowblind and The Island

"A superb historical mystery: inventive, twisty, addictive and utterly beguiling. I fell for this book (and its characters) in a big way. Beautifully crafted escapism for fans of Sherlock and Master & Commander. A triumph." — Will Dean, author of Dark Pines

"The desperate life on board an Amsterdam-bound Dutch Indiamen has never been so vividly painted. Throw in a demon (who may or may not exist), a cast of beautifully realized, compelling characters, along with a series of locked room mysteries, and the result is one of the most extraordinary books being published this year." — M.W. Craven, author of The Puppet Show, winner of the 2019 CWA Gold Dagger Award 2019