The Perilous Adventures of the Cowboy King: A Novel of Teddy Roosevelt and His Times (Hardcover) 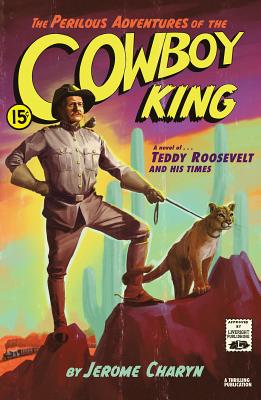 By Jerome Charyn
$26.95
Order Processes in 1-5 Days Depending on Store Stock

"Charyn, like Nabokov, is that most fiendish sort of writer—so seductive as to beg imitation, so singular as to make imitation impossible." —Tom Bissell

Raising the literary bar to a new level, Jerome Charyn re-creates the voice of Theodore Roosevelt, the New York City police commissioner, Rough Rider, and soon- to-be twenty-sixth president through his derring-do adventures, effortlessly combining superhero dialogue with haunting pathos. Beginning with his sickly childhood and concluding with McKinley’s assassination, the novel positions Roosevelt as a “perfect bull in a china shop,” a fearless crime fighter and pioneering environmentalist who would grow up to be our greatest peacetime president.

With an operatic cast, including “Bamie,” his handicapped older sister; Eleanor, his gawky little niece; as well as the devoted Rough Riders, the novel memorably features the lovable mountain lion Josephine, who helped train Roosevelt for his “crowded hour,” the charge up San Juan Hill. Lauded by Jonathan Lethem for his “polymorphous imagination and crack comic timing,” Charyn has created a classic of historical fiction, confirming his place as “one of the most important writers in American literature” (Michael Chabon).

Jerome Charyn's stories have appeared in The Atlantic, Paris Review, American Scholar, Epoch, Narrative, Ellery Queen, and other magazines. His most recent novel is I Am Abraham. He lived for many years in Paris and currently resides in Manhattan.

A rendering of Teddy Roosevelt's early life that spotlights formative moments in colorful, entertaining episodes. Charyn makes artful use of historical fact and fiction's panache to capture the man before he became one of the great U.S. presidents and a face on Mount Rushmore.

Marked from beginning to end by restlessness and adventure.... A ripping, enjoyable yarn.
— Keir Graff, Booklist

Who wouldn’t want to grow old like Jerome Charyn? Now in his 80s, the prolific writer seems ever more daring. Charyn has found a path all his own — neither a substitute for biography nor a violation of it.... For fans of Roosevelt, this is tremendous fun.... One of the melancholy pleasures of this novel is the contrast it continually presents to our current president. The reviewer’s handbook says I’m not supposed to judge a book by its cover, but I have to offer some praise for this unusually witty dust jacket. It strikes just the right tone, as does this delightful novel.
— Ron Charles, The Washington Post

Graced with vivid, vigorous writing.... [Charyn] has written the rousing yarn advertised in his title and dust jacket, and he has written it well.
— Gerard Helferich, The Wall Street Journal

Warning: don't turn to the first page of Jerome Charyn's remarkable new work of fiction The Perilous Adventures of the Cowboy King unless you have time to be utterly swept away for the next ___ hours.

Jerome Charyn has long been one of our most rewarding novelists, and he has upped the ante in The Perilous Adventures of the Cowboy King, his frolic about Teddy Roosevelt in the West.

Jerome Charyn is a one off: no other living American writer crafts novels with his vibrancy of historical imagination. If you think his novels about Dickinson and Lincoln are virtuosic works of art, The Cowboy King will astonish you anew. Here is Teddy Roosevelt as you’ve never before experienced him, and as you won’t soon forget him.
— William Giraldi, author of American Audacity: In Defense of Literary Daring

For TR, Mr. Charyn pulls out the stops offering up the man in his own voice, a magnificent mashup of macho and aristocrat.... Cowboy King is a novel at its best: engaging, immersive and compelling.


No one rewrites America's strange history-- or its maverick characters-- with more flair, sharp-shooting wit, and compassion than the many-sided Jerome Charyn. And in The Perilous Adventures of the Cowboy King, he's done it again: he's written a raucous, poignant, charming novel about a raucous, poignant, charming Teddy Roosevelt, a man of his time, and ours. Don't miss it.