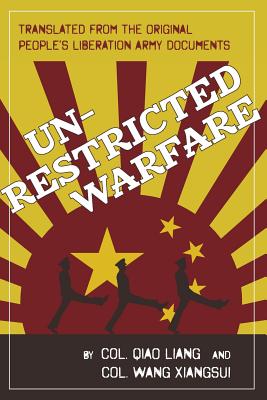 By Qiao Liang, Wang Xiangsui
Order Processes in 1-5 Days Depending on Store Stock

A sobering and fascinating study on war in the modern era, Unrestricted Warfare carefully explores strategies that militarily and politically disadvantaged nations might take in order to successfully attack a geopolitical super-power like the United States. American military doctrine is typically led by technology; a new class of weapon or vehicle is developed, which allows or encourages an adjustment in strategy. Military strategists Qiao Liang and Wang Xiangsui argue that this dynamic is a crucial weakness in the American military, and that this blind spot with regard to alternative forms warfare could be effectively exploited by enemies. Unrestricted Warfare concerns the many ways in which this might occur, and, in turn, suggests what the United States might do to defend itself.

The traditional mentality that offensive action is limited to military action is no longer adequate given the range of contemporary threats and the rising costs-both in dollars and lives lost-of traditional warfare. Instead, Liang and Xiangsui suggest the significance of alternatives to direct military confrontation, including international policy, economic warfare, attacks on digital infrastructure and networks, and terrorism. Even a relatively insignificant state can incapacitate a far more powerful enemy by applying pressure to their economic and political systems. Exploring each of these considerations with remarkable insight and clarity, Unrestricted Warfare is an engaging evaluation of our geopolitical future.