Ashoka the Fierce: How an Angry Prince Became India’s Emperor of Peace (Hardcover) 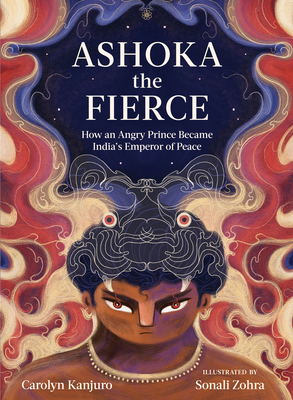 As a boy, Ashoka was overlooked as a successor to his father, the emperor. He grew to become arrogant, impatient, and above all, angry. Wanting nothing more than to be king, Ashoka learned to be cunning, and when he finally managed to ascend to the throne, he was eager for war. But after a particularly brutal battle, Ashoka was heartbroken and  haunted by the death and devastation he had caused. This moment marked a momentous change of heart.

Upon returning home, Ashoka’s wife encouraged him to study and practice the Buddhist teachings and to move beyond his destructive past. When Ashoka finally met a wise Buddhist monk, it transformed the way he saw the world and the role of an emperor. Ashoka spent the rest of his days tirelessly working to help his people and promoting the qualities of compassion, tolerance, and virtue.

CAROLYN KANJURO was a director, playwright, tutor for children, celebrated author of children's books, and life-long Buddhist practitioner. She is the author of Sit with Me and The Monkey Mind Meditation Deck.

SONALI ZOHRA is an illustrator from Bangalore, India. Her studio is watched over by a fairly wild and dangerous cat. She has a background in fine art and photography and holds a master's degree in design. Sonali currently spends most of her time illustrating children's books and is in the process of writing and illustrating one of her own.

“A compelling treatment of the life of an important South Asian ruler and religious leader.”—Kirkus Reviews

“Superbly illustrated with the artwork of Sonali Zohra, Ashoka the Fierce by author Carolyn Kanjuro is a picture book biography that is especially recommended for family, daycare center, preschool, elementary school, and community library picture book biographies in general, and Buddhist history in particular.”—Midwest Book Review