Was Jesus a Socialist?: Why This Question Is Being Asked Again, and Why the Answer Is Almost Always Wrong (Paperback) 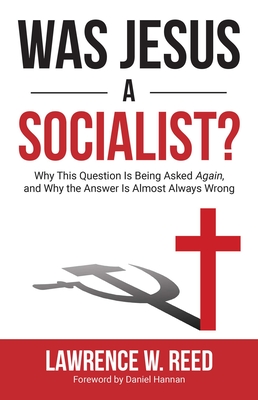 By Lawrence W. Reed
$14.95
Order Processes in 1-5 Days Depending on Store Stock

“If anyone was ever a socialist, it was Jesus.”
—Kelley Rose, Democratic Socialists of America
Economist and historian Lawrence W. Reed has been hearing people say “Jesus was a socialist” for fifty years. And it has always bothered him.

Now he is doing something about it.

His new book demolishes the claim that Jesus was a socialist. Jesus called on earthly governments to redistribute wealth? Or centrally plan the economy? Or even impose a welfare state?

Point by point, Reed answers the claims of socialists and progressives who try to enlist Jesus in their causes. As he reveals, nothing in the New Testament supports their contentions.
Was Jesus a Socialist? could not be more timely. Socialism has made a shocking comeback in America. Poll after poll shows that young Americans have a positive image of socialism. In fact, more than half say they would rather live in a socialist country than in a capitalist one.

And as socialism has come back into vogue, more and more of its advocates have tried to convince us that Jesus was a socialist.

This rhetoric has had an impact. According to a 2016 poll by the Barna Group, Americans think socialism aligns better with Jesus’s teachings than capitalism does. When respondents were asked which of that year’s presidential candidates aligned closest to Jesus’s teachings, a self-proclaimed “democratic socialist” came out on top. Sure enough, the same candidate earned more primary votes from under-thirty voters than did the eventual Democratic and Republican nominees combined.

And in a 2019 survey, more than 70 percent of millennials said they were likely to vote for a socialist.

Was Jesus a Socialist? expands on the immensely popular video of the same name that Reed recorded for Prager University in July 2019. That video has attracted more than four million views online.

Ultimately, Reed shows the foolishness of trying to enlist Jesus in any political cause today. He writes: “While I don’t believe it is valid to claim that Jesus was a socialist, I also don’t think it is valid to argue that he was a capitalist. Neither was he a Republican or a Democrat. These are modern-day terms, and to apply any of them to Jesus is to limit him to but a fraction of who he was and what he taught.”

Lawrence W. Reed is president emeritus of the Foundation of Economic Education (FEE) and the author or editor of several books, including Excuse Me, Professor: Challenging the Myths of Progressivism and Real Heroes: Inspiring True Stories of Courage, Character, and Conviction (ISI Books). Prior to joining FEE in 2008, he served for twenty years as president of the Mackinac Center for Public Policy. He also taught economics full-time for nearly a decade. A frequent guest on radio and television, Reed has written thousands of articles and delivers dozens of speeches each year. He has received the Alumni Achievement Award from his alma mater, Grove City College.

“A fun and eminently readable book. . . . Mr. Reed is a learned man, an economist and historian, steeped in the writings of the great classical writers and thinkers in history and theology. But this is a book geared to the popular audience, a worthwhile gift for your daughter, son, pastor, and good friends. With humor, direct quotation, and clear exposition, Mr. Reed demonstrates how Christianity and socialism, far from being in sync, are ultimately at odds with each other.”
—Washington Times

“‘Jesus was a socialist’: Don’t you hear that a lot? Well, here’s an entire book that explains not only how that isn’t true but also how we can really know it isn’t true. . . . I hope a lot of people will learn the truth from this book.”
—Eric Metaxas, radio host and #1 New York Times bestselling author

“A timely, lively, learned and well-argued masterpiece that deftly demolishes the claims that Jesus was at heart a Marxist. Reed’s impressively deep knowledge of economics and the New Testament shines through. Woe to those who try to challenge him on the subject of Jesus’s alleged political beliefs!”
—Steve Forbes

“What is the true defining characteristic of socialism? As Larry Reed shows, it is not compassion but coercion. . . . It is hard to find any argument for coercive force in Jesus’s teachings.”
—Daniel Hannan, bestselling author of Inventing Freedom and The New Road to Serfdom, from the foreword

“Growing up as a pastor’s son, one of the earliest lessons my father gave me was this: ‘The love of money is the root of all evil, but a wise understanding of its nature and purpose is the beginning of much good.’ The teachings of Jesus are often misunderstood as being anti-wealth by those who tend to overlook the very kinds of conditions that make generosity possible. Larry Reed’s ideas provide timely insights into how the teachings of Jesus can transform our economic understanding in a way that leads to greater prosperity for all.”
—T. K. Coleman, Director of Entrepreneurial Education, Foundation for Economic Education

“For more than a century, many progressives have insisted that Jesus was a socialist. Not so, says economist Lawrence Reed. Scripture by scripture, he proves from Jesus’s words and his parables that Jesus wanted people to use their own free will to solve problems. Thanks to this book, progressives will never again be able to claim with any credibility that Jesus would stoop to be a socialist.”
—Burton W. Folsom, Distinguished Fellow, Hillsdale College; author of New Deal or Raw Deal? and The Myth of the Robber Barons

“With impeccable scholarship, logic, and clarity, Was Jesus a Socialist? demolishes the various arguments that Jesus was, or even could be considered, a socialist. Reed sheds much-needed biblical light on the political economy of the ‘real Jesus.’ This book is a must read in today’s political climate.”
—Dr. Judd W. Patton, Professor Emeritus in Economics, Bellevue University