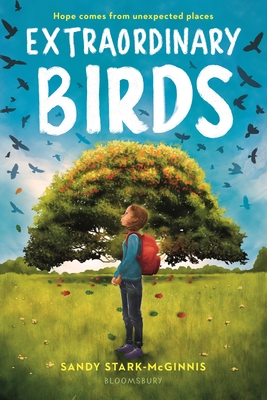 “Sandy Stark-McGinnis brilliantly and passionately writes about 11-year-old December’sreluctant and courageous struggle from heartbreaking disappointment to trust. After bouncing around from one unhappy foster home to another, December has found her own way to cope with the rejection and pain of a devastating childhood. McGinnis writes a sensitive story about family, trust, bullying, mental health, and identity in a way that middle-grade kids can empathize with. I’m sure this novel will find its way into many classrooms and into the hearts of readers everywhere.”
— Sara Ornelas, Blue Baboon Books, Wichita, KS

For fans of The Thing About Jellyfish, Counting by 7s, and Fish in a Tree, a heartbreaking and hopeful story about a unique young girl on a journey to find home.

December believes she is a bird. The scar on her back is where her wings will sprout, and one day soon, she will soar away. It will not matter that she has no permanent home. Her destiny is in the sky.

But then she's placed with foster mom Eleanor, a kind woman who volunteers at an animal rescue and has secrets of her own. December begins to see that her story could end a different way – but could she ever be happy down on the ground?

In her arresting debut, Sandy Stark-McGinnis offers an inspiring story about family, friendship, and finding where you belong.

Sandy Stark-McGinnis is a debut author and award-winning poet whose work has appeared in Quercus Review, In the Grove, and Penumbra. She holds an MA in Creative Writing from San Francisco State University. Sandy lives with her husband and children in California, where she works as a fifth grade teacher.
www.sandystarkmcginnis.com
@McGinnisSandy

“A beautiful story filled with heart.” —Holly Goldberg Sloan, author of Counting by 7s and coauthor of To Night Owl from Dogfish.

“A heartbreaking and hopeful story about a young girl who learns the power of kindness and the beauty of belonging.” —School Library Journal, starred review

“With an endearing and diverse cast of characters, this is a unique debut novel with an inspiring message of hope, determination, and fortitude... Highly Recommended.” —School Library Connection, starred review

“This ably constructed first-person narrative is meant to tug at the heartstrings and it surely does, encouraging readers to hope for a happy ending to this affecting story.” —Booklist

“Stark-McGinnis adds a vivid artistic flourish with the avian theme [and] writes with smooth sympathy… This is a gracefully written modern take on the orphan story.” —BCCB

“Stark-McGinnis nimbly constructs poignant relationships born of reciprocal patience, trust, and understanding, and December's connections with Eleanor, Cheryllynn, and the red-tailed hawk feel authentic and earned…. This sensitive debut is a sincere and hopeful exploration of family, history, and belonging from a promising new voice.” —Publishers Weekly

“Feels genuine . . . At its heart this is a novel about the power of narrative and the possibilities born when we claim the stories we tell ourselves as our own.” —Horn Book Magazine

“This soulful story will wing its way straight into your heart.” —Jess Keating, zoologist and author of the My Life is a Zoo series

“Such a tender story. You'll root for this bird-loving girl to soar.” —Sally Pla, award-winning author of The Someday Birds

“An emotional tale about finding one's home and facing one's truth...An extraordinary debut!” —Ellie Terry, author of Forget Me Not