The Presidents vs. the Press: The Endless Battle between the White House and the Media--from the Founding Fathers to Fake News (Hardcover) 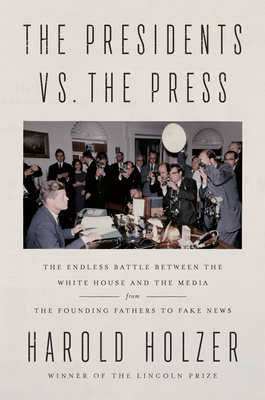 An award-winning presidential historian offers an authoritative account of American presidents' attacks on our freedom of the press.

“The FAKE NEWS media,” Donald Trump has tweeted, “is not my enemy, it is the enemy of the American People!” Has our free press ever faced as great a threat? Perhaps not—but the tension between presidents and journalists is as old as the republic itself.

Every president has been convinced of his own honesty and transparency; every reporter who has covered the White House beat has believed with equal fervency that his or her journalistic rigor protects the country from danger. Our first president, George Washington, was also the first to grouse about his treatment in the newspapers, although he kept his complaints private. Subsequent chiefs like John Adams, Abraham Lincoln, Woodrow Wilson, and Barack Obama were not so reticent, going so far as to wield executive power to overturn press freedoms, and even to prosecute journalists.

Theodore Roosevelt was the first president to actively manage the stable of reporters who followed him, doling out information, steering coverage, and squashing stories that interfered with his agenda. It was a strategy that galvanized TR’s public support, but the lesson was lost on Woodrow Wilson, who never accepted reporters into his inner circle. Franklin Roosevelt transformed media relations forever, holding more than a thousand presidential press conferences and harnessing the new power of radio, at times bypassing the press altogether. John F. Kennedy excelled on television and charmed reporters to hide his personal life, while Richard Nixon was the first to cast the press as a public enemy. From the days of newsprint and pamphlets to the rise of Facebook and Twitter, each president has harnessed the media, whether intentional or not, to imprint his own character on the office.

In this remarkable new history, acclaimed scholar Harold Holzer examines the dual rise of the American presidency and the media that shaped it. From Washington to Trump, he chronicles the disputes and distrust between these core institutions that define the United States of America, revealing that the essence of their confrontation is built into the fabric of the nation.

Harold Holzer is the recipient of the 2015 Gilder Lehrman Lincoln Prize. One of the country's leading authorities on Abraham Lincoln and the political culture of the Civil War era, Holzer was appointed chairman of the US Abraham Lincoln Bicentennial Commission by President Bill Clinton and awarded the National Humanities Medal by President George W. Bush. He currently serves as the director of the Roosevelt House Public Policy Institute at Hunter College, City University of New York.

“[The Presidents vs. The Press] gives us a panoramic survey of the most contentious president-on-press brawls from the past two and a quarter centuries, providing both the scholar and the general reader with valuable perspective on the current bout between Trump and reporters.”—The New York Times Book Review

“A lively, deeply researched history of the roller-coaster relationships between presidents and journalists, from George Washington to Donald Trump . . . Holzer recounts all this and much more in considerable colorful detail.”—The Washington Post

“An immensely informative account of the perennial struggle between presidents and the fourth estate.” —Minneapolis Star Tribune

“A shrewd history of the fight to convey and repress objective truth.”—Kirkus

“A lively and informative work that will appeal to anyone interested in American history, politics, and journalism.”—Library Journal

“While this fascinating book doesn’t ease the pain and anxiety of witnessing the elevated battle between Trump and reporters, it does provide an essential historical perspective.”—Booklist

“Harold Holzer has brought us a sweeping, groundbreaking, and important history of the conflict between American presidents and the press, and it could not arrive at a more crucial moment.”—Michael Beschloss, NBC News presidential historian and New York Times bestselling author of Presidents of War

“Harold Holzer’s fascinating new book beautifully narrates the long history of contention between the press and the White House, but it does more than that. Presidential politics were born at the dawn of popular newspaper writing, and the fighting, seducing, and conniving on both sides has continued ever since. Presidents and reporters can’t really exist without each other, and Holzer, a historian of the presidency with the eye of a reporter, expertly explains why.”—Sean Wilentz, Pulitzer Prize finalist and author of The Rise of American Democracy: Jefferson to Lincoln

“Harold Holzer is a master in telling us exactly what we need to know—no more, no less—on a critical and obsessive relationship spanning 200 years. With a gimlet eye, Holzer shows how some of our best presidents—from George Washington to Abraham Lincoln to Barack Obama—were the most resistant to press scrutiny.”—Jonathan Alter, New York Times bestselling author of His Very Best: Jimmy Carter, a Life

“Not surprisingly, George Washington was the first president to protest ‘the malicious falsehoods’ and ‘violent abuse’ he’d suffered from the press. In this vivid, anecdotal history, Harold Holzer, himself a shrewd veteran of political press relations as well as a fine historian, chronicles the ways in which Washington and eighteen of his most important successors have sought to seduce and cajole, defy, and sometimes conspire with the men and women who cover them. No one interested in the presidency—or in the long history of ‘fake news’—should miss it.”—Geoffrey C. Ward, New York Times bestselling author of A First Class Temperament: The Emergence of Franklin Roosevelt

“From George Washington railing against ‘infamous scribblers’ to the ravings of Donald Trump against ‘fake news,’ there is an inherent tension between presidents and the press. Harold Holzer brings this centuries-long struggle to life in a brisk, enjoyable and authoritative book that offers valuable perspective on the art of governing while shining a light on how the free press is still the ultimate guarantor of freedom.”—John Avlon, CNN Senior Political Analyst and author of Washington’s Farewell: The Founding Father’s Warning to Future Generations