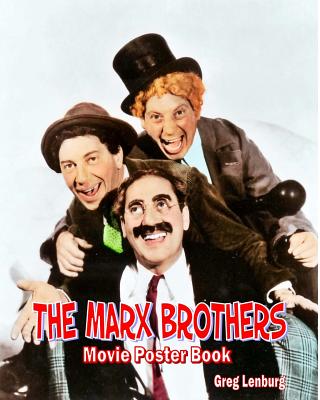 They made only 13 feature films, but their films, like their zany antics, have withstood the test of time. They are the Marx Brothers (Groucho, Chico, Harpo and sometimes Zeppo). Their films are more than just classics: five of them were selected by the American Film Institute (AFI) as among the top 100 comedy films, with two of them ("Duck Soup" and "A Night at the Opera") in the top twelve. The "Marx Brothers Movie Poster Book" contains more than 40 pieces of poster art, including for all 13 of the team's feature films, from "The Cocoanuts" (1929) to "The Story of Mankind" (1957) in which they appeared in cameo roles It also contains a sampler of other promotional materials (lobby cards, half sheets, etc.) from some of their films, compilation and re-released films, and Groucho's solo films.So Marx Brothers fans, pull up a chair, cut the cards, get your half a cup of coffee and enjoy the "Marx Brothers Movie Poster Book." 54 Pages/Color on White Paper.