The Nones: Where They Came From, Who They Are, and Where They Are Going (Paperback) 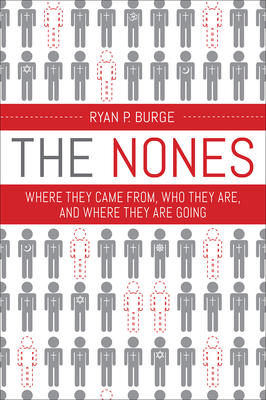 In The Nones: Where They Came From, Who They Are, and Where They Are Going, Ryan P. Burge details a comprehensive picture of an increasingly significant group--Americans who say they have no religious affiliation.

The growth of the nones in American society has been dramatic. In 1972, just 5 percent of Americans claimed no religion on the General Social Survey. In 2018, that number rose to 23.7 percent, making the nones as numerous as both evangelical Protestants and Roman Catholics. Every indication is that the nones will be the largest religious group in the United States in the next decade.

Burge illustrates his precise but accessible descriptions with charts and graphs drawn from over a dozen carefully curated datasets, some tracking changes in American religion over a long period of time, others large enough to allow a statistical deep dive on subgroups such as atheists and agnostics. Burge also draws on data that tracks how individuals move in and out of religion over time, helping readers understand what type of people become nones and what factors lead an individual to return to religion.

The Nones gives readers a nuanced, accurate, and meaningful picture of the growing number of Americans who say they have no religious affiliation. Burge explains how this rise happened, who the nones are, and what they mean for the future of American religion.