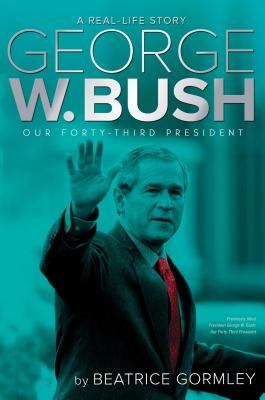 By Beatrice Gormley
$17.99
Email or call for price.

Learn about the life of the 43rd President of the United States in this updated biography of George W. Bush, specially written for a younger audience.

President George W. Bush once said, “I never dreamed about becoming president. When I was growing up, I wanted to be Willie Mays.”

George W. was born July 6, 1946, in New Haven, Connecticut. He grew up in Texas but returned to Connecticut to attend Yale University. As a young man he trained as a fighter pilot in the Texas Air National Guard before beginning a career in business. He entered Texas politics and served as the state’s governor from 1994 to 2000.

In 2001 George W. Bush won one of the closest, and most disputed, presidential elections in United States history. During his first term Bush launched a war against terrorism after the devastating attacks of September 11, 2001. In 2004 he won his second term against John Kerry.

Originally published as President George W. Bush in 2005, this revised biography of the 43rd President of the United States includes eight pages of photos as well as a timeline and index.

Beatrice Gormley has written a number of books for young readers, including several titles in the History’s All-Stars series, as well as biographies of Barack Obama, George W. Bush, Laura Bush, and John McCain. She lives in Westport, Massachusetts.