Ivor A. Stevens: Soldier, Politician, Businessman, and Family Man: The Man, His Times, and the Politics of St. Kitts-Nevis (Paperback) 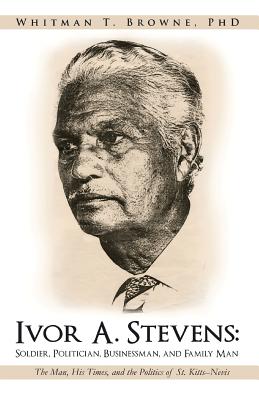 Ivor A. Stevens was an uncommon human being and an even more uncommon politician. He was born on St. Kitts, but grew up in the sister island of Nevis. He later served in the Canadian military, during World War 11. Upon his return to St. Kitts-Nevis in the late 1940s, Stevens soon found himself in the center of a developing political confl ict between the two islands. In time, he settled on Nevis and took that island's side.

Eventually, Stevens became embroiled in a political love-hate relationships with two Nevisians, Eugene Walwyn and Simeon Daniel. Each of the three men was destined to leave his mark on the island's politics and history. Walwyn was soon labeled a traitor to Nevis. Later, despite the fact that Stevens and Daniel worked together in the same political party for many years, the two men came to mistrust the vision and intent of each other's politics.

The Caribbean does have a long history of authoritarian and "forever" leadership. However, Stevens was careful to focus on empowering younger Nevisians to become future leaders and politicians. He was interested in preserving the environment and the island's traditional culture. Often, Mr. Stevens stood in defense of the common citizens' rights, against wealthy elites. He also played a critical role in encouraging a less combative relationship between the people of St. Kitts and Nevis.

This is his story: