Star Wars: Absolutely Everything You Need to Know, Updated and Expanded (Hardcover) 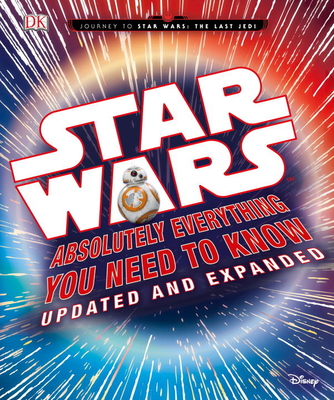 Why does Kylo Ren talk to a helmet? What type of trooper guards a tropical beach? With brand new content, including a sneak peek of the Star Wars: The Last Jedi™, discover fun facts about Star Wars characters like Rey, BB-8, Jyn Erso, Admiral Thrawn, and Snoke, and feast your eyes on interesting trivia on locations such as Jedha, Maz Kanata's castle, and Starkiller Base.

DK's best-selling title Star Wars: Absolutely Everything You Need to Know has now been updated and expanded with all-new weird and wonderful data, strange-but-true facts and cool "Did you know?" Q&As, featuring material from Star Wars: The Force Awakens™, Rogue One: A Star Wars Story™, Star Wars Rebels™, and Star Wars: The Clone Wars™.

Get a sneak peek of characters, costumes, and creatures from the upcoming and much-talked about new movie, Star Wars: The Last Jedi. From movie-making trivia to quirky data you never knew you never knew, this book will excite new and old fans alike of that galaxy far.

Adam Bray is a life-long fan of Star Wars™ and author of several DK Star Wars books. He most recently co-wrote DK's bestselling Star Wars: The Visual Encyclopedia. Adam is also a contributor to the official blog at StarWars.com, and a guest commentator on many popular Star Wars fan podcasts. He lives in Michigan.

Cole Horton is a historian, pop culture enthusiast, and longtime Star Wars aficionado. He is a frequent contributor for Lucasfilm and Marvel, writing for StarWars.com, Marvel.com, and the Marvel Augmented Reality app. He most recently co-wrote DK's bestselling Star Wars: The Visual Encyclopedia. He lives in San Francisco, California, with his wife.

Michael Kogge is a screenwriter and author residing in Los Angeles. He's written for the Star Wars universe for more than two decades, and his recent titles include the new Star Wars Rebels™ junior novelizations. Michael's online home is michaelkogge.com.