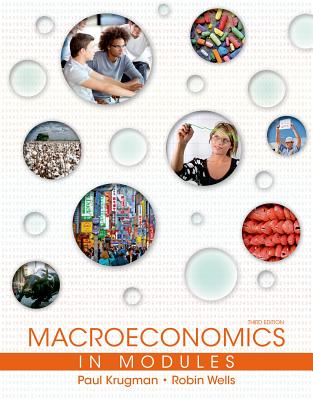 Adapted by Paul Krugman and Robin Wells from their bestselling macroeconomics textbook, Macroeconomics in Modules is the only text for the principles of macroeconomics course organized in the supremely accessible, highly effective modular format. Instead of chapters of standard length, the book covers the fundamentals of macroeconomics in 49 brief (4-10 page) modules divided into 14 sections. Macroeconomics in Modules offers the best of what makes Krugman/Wells a classroom favorite (story-telling approach, engaging writing, fascinating examples and cases), in a format students and instructors will love. Extensive educational research shows that students absorb more from shorter reading assignments than longer ones. And with coverage in self-contained modules, instructors can assign specific topics without asking students to read entire chapters. See what's in the LaunchPad.

Paul Krugman, recipient of the 2008 Nobel Memorial Prize in Economics, is Professor of Economics at Princeton University, where he regularly teaches the principles course. He received his BA from Yale and his PhD from MIT. Prior to his current position, he taught at Yale, Stanford, and MIT. He also spent a year on staff of the Council of Economics Advisors in 1982-1983. His research is mainly in the area of international trade, where he is one of the founders of the "new trade theory," which focuses on increasing returns and imperfect competition. He also works in international finance, with a concentration in currency crises. In 1991, Krugman received the American Economic Association s John Bates Clark medal. In addition to his teaching and academic research, Krugman writes extensively for nontechnical audiences. Krugman is a regular op-ed columnist for the New York Times. His latest trade book, The Conscience of a Liberal, is a best-selling study of the political economy of economic inequality and its relationship with political polarization from the Gilded Age to the present. His earlier books, Peddling Prosperity and The Age of Diminished Expectations, have become modern classics. Robin Wells was a lecturer and researcher in Economics at Princeton University, where she has taught undergraduate courses. She received her BA from the University of Chicago and her PhD from the University of California, Berkeley; she then did her postdoctoral work at MIT. She has taught at the University of Michigan, the University of Southhampton (United Kingdom), Stanford, and MIT. Her teaching and research focus on the theory of organizations and incentives."