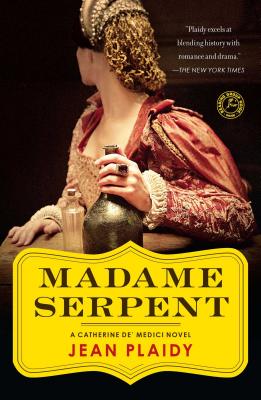 Back in print after more than twenty years and for the first time in eBook, Madame Serpent, the first novel in Jean Plaidy's classic Catherine de Medici trilogy, introduces readers to the young de Medici princess.

Fourteen-year-old Catherine de’ Medici arrives in Marseilles to marry Henry, Duke of Orleans, second son of the King of France. The brokenhearted Catherine has left her true love in Italy, forced into trading her future happiness for marriage into the French royal family.

Amid the glittering fêtes and banquets of the most immoral court in sixteenth-century Europe, the reluctant bride becomes a passionate but unwanted wife. Humiliated and unloved, Catherine spies on Henry and his lover, the infamous Diane de Poitiers. Tortured by what she sees, Catherine becomes consumed by a ruthless ambition destined to make her the most despised woman in France: the dream that one day the French crown will be worn by a Medici heir. . . .

Jean Plaidy, the pen name of the prolific English author Eleanor Hibbert, was one of the preeminent authors of historical fiction for most of the twentieth century. Her novels have been translated into more than twenty languages and have sold more than 100 million copies worldwide. She died in 1993.

"Seldom has a character been brought to life with such clarity."
— Chicago Sunday Tribune

"Plaidy has crafted a compelling narrative, full of historical detail and fascinating characters. She is credited with resurrecting the historical novel as a genre, and Madame Serpent shows why."
— The Free Lance-Star