In the Shadow of the Banyan: A Novel (Hardcover) 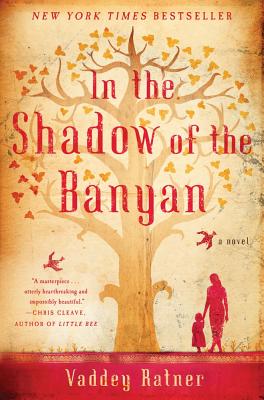 By Vaddey Ratner
Email or call for price.
Hard to Find

“Ratner's remarkable debut novel transforms her childhood experiences living through the horrors of the Khmer Rouge regime in Cambodia into the finest of literary fiction. The story is narrated by the precocious Raami, whose privileged life is shattered when soldiers ravage Phnom Penh and send her aristocratic family to work camps in the countryside. The powerful writing sweeps you along like the broad Mekong River through the years of heartbreaking loss, hard labor, and starvation, and yet somehow, like Raami, you emerge from the book sobered, but with spirit unbroken. A powerful testament to the tenacity of love and family in the face of unspeakable inhumanity.”
— Caitlin Caufiled, Odyssey Bookshop, South Hadley, MA

Told from the tender perspective of a young girl who comes of age amid the Cambodian killing fields, this searing first novel—based on the author’s personal story—has been hailed by Little Bee author Chris Cleave as “a masterpiece…utterly heartbreaking and impossibly beautiful.”

You are about to read an extraordinary story. It will take you to the very depths of despair and show you unspeakable horrors. It will reveal a gorgeously rich culture struggling to survive through a furtive bow, a hidden ankle bracelet, fragments of remembered poetry. It will ensure that the world never forgets the atrocities committed by the Khmer Rouge regime in Cambodia between 1975 and 1979, when an estimated two million people lost their lives. It will give you hope, and it will confirm the power of storytelling to lift us up and help us not only survive but transcend suffering, cruelty, and loss.

For seven-year-old Raami, the shattering end of childhood begins with the footsteps of her father returning home in the early dawn hours, bringing details of the civil war that has overwhelmed the streets of Phnom Penh, Cambodia’s capital. Soon the family’s world of carefully guarded royal privilege is swept up in the chaos of revolution and forced exodus. Over the next four years, as the Khmer Rouge attempts to strip the population of every shred of individual identity, Raami clings to the only remaining vestige of her childhood— the mythical legends and poems told to her by her father. In a climate of systematic violence where memory is sickness and justification for execution, Raami fights for her improbable survival. Displaying the author’s extraordinary gift for language, In the Shadow of the Banyan is a brilliantly wrought tale of human resilience.

“Lyrical . . . It’s Raami’s mother who will stay in your heart . . . Somehow she retains the will to survive and the strength to help others, fiercely telling her daughter, ‘Remember who you are.’”

“How is it that so much of this bleak novel is full of beauty, even joy? . . . What is remarkable, and honorable, here is the absence of anger, and the capacity—seemingly infinite—for empathy.”

“The horrors committed by Cambodia's Khmer Rouge, as experienced by one extremely resilient girl. A brutal novel, lyrically told.”

“Lyrical . . . a love story to her homeland and an unflinching account of innocents caught in the crossfire of fanaticism.”

“A tale of perseverance, hope and the drive toward life.”

“Humanity . . . shines through in her storytelling.”

“For all the atrocities witnessed and hardships experienced, Ratner’s story is filled to an even larger extent with opportunism and beauty. Ratner’s gift is her exquisite descriptions of the careful details of daily life . . . Ratner describes her desire to memorialize the loved ones she lost with an enduring work of art. She has done just that; hers is a beautiful tale with considerable poetry and restraint. In the Shadow of the Banyan is an important novel, written by a survivor with unexpected grace and eloquence.”

“The powerful story of how even the most brutal regime lacked the power of a father’s love for his daughter.”

“One of those brave novels of resilience and the power of love that surface once or twice in a generation, like Khaled Hosseini’s The Kite Runner.”

"Although Ratner provides a glimpse into what was going on in the country, this is Raami's story. Her personality and experience gives the novel its power. . . . Although she doesn't shy away from violence, loss and grief, she pays equal attention to small moments of compassion and natural beauty."

“Vaddey Ratner's debut novel bears witness to the atrocities of Cambodia's Khmer Rouge and is not an easy read, but it captures the beauty and resilience of the human spirit.”

“Ratner’s engrossing presentation of this tragedy is a remarkable achievement. This is one of those novels that lead writers like me to believe that real truth is best found in fiction.”

“This stunning memorial expresses not just the terrors of the Khmer Rouge but also the beauty of what was lost. A hauntingly powerful novel imbued with the richness of old Cambodian lore, the devastation of monumental loss, and the spirit of survival.”

“An emotionally moving story . . . This tale of physical and emotional adversity grips readers without delving into the graphic nature of the violence that occurred at the time . . . Ratner's contemplative treatment of her protagonist and the love shared among the family stands in stark contrast to the severe reality they faced each day to survive. Knowing that the story was culled from Ratner's experiences as a child brings a sense of immediacy to this heartrending novel likely to be appreciated by many readers.”

“Her heartrending, mournful tale depicts the horrors of thekilling fields and the senselessness of the violence there while still managing to capture small, beautiful moments…By countering the stark and abject realityof her experience with lyrical descriptions of the natural beauty of Cambodia and its people, Ratner has crafted an elegiac tribute to the Cambodia she knewand loved.”

“Vividly told . . . a message of hope and [a] reminder of the depth of human spirit. Stories like this reach deep inside us and are, dare I say, life-changing?”

“Filled with gut-wrenching atrocities, this surprising story will transport you to a tragic time in history and show you how survival can depend on faith in family and memories that give you wings.”

“Evocative, lyrical. . . . Accessible and profoundly moving, In the Shadow of the Banyan is destined to become a classic.”

“Ratner's touching and beautifully written In the Shadow of the Banyan celebrates the human spirit, the power of story and imagination and the triumph of good over evil.”

“In the Shadow of the Banyan is one of the most extraordinary and beautiful acts of storytelling I have ever encountered. . . . This book pulls off the unsettling feat of being—at the same time—utterly heartbreaking and impossibly beautiful. There are some moments in this story that are among the most powerful in literature. This is a masterpiece that takes us to the highs and lows of what human beings can do in this life, and it leaves us, correspondingly, both humbled and ennobled.”

“Vaddey Ratner’s novel is ravishing in its ability to humanize and personalize the Cambodian genocide of the 1970’s. She makes us look unflinchingly at the evil that humankind is capable of, but she gives us a child to hold our hand—an achingly believable child—so that we won’t be overwhelmed. As we have passed from one century of horrors and been plunged into a new century giving us more of the same, In the Shadow of the Banyan is a truly important literary event.”

“‘Words . . . turn a world filled with injustice and hurt into a place that is beautiful and lyrical,’ says Vaddey Ratner’s father in her stunning debut novel, and this is exactly what she has accomplished. Ratner has managed to conflate a child’s magical and indomitable hope with the horrific experience of the Khmer Rouge genocide to create a work that at once both deeply wounds and profoundly uplifts. With lyrical and breathtaking prose, Ratner plunges us into the midst of the nightmare that was thrust upon her, and yet, even amidst the darkness of starvation and violence, she never abandons us to despair. She always offers us the glimmering thread of hope and of love. She offers us wings. In a book rich with Buddhist teachings, the mythology of Cambodia, and the natural beauty of her world, Ratner weaves a moving tribute not only to her father and family but to victims of all genocides—past, present, and future.”

“An astonishing book, unlike anything else that has emerged from Cambodia and its tragedies. In contrast to other books dealing with the Khmer Rouge period, this is not a memoir—it is literature, and literature of a high order.”

“A compelling new voice in world literature. Through the coming of age story of a sensitive girl, Ratner dramatizes both the brutalities of the Khmer Rouge and the emotional cost of survival.”