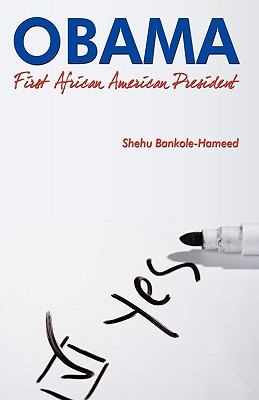 THE UNITED STATES PRESIDENTIAL election of 2008 produced a monumental result, sending a message of change, hope and inspiration to millions of people not only in this country, but worldwide. Obama: First African American President takes a comprehensive look at the entire election process from the primaries to the general election.

Shehu Bankole-Hameed is an immigrant born in Nigeria. Now a United States citizen, he offers a fresh perspective as he shares his careful examination and honest viewpoints regarding the American political system. Beginning with a brief history of Barack Obama-his education, family, and his platforms-Bankole-Hameed moves into an in-depth exploration of the presidential primaries, President Obama's campaign message, the general election, and the challenges the new President faces. Bankole-Hameed also discusses the contributions of Oprah Winfrey, as well as other African Americans whose dedication to change contributed to the largest number of total votes ever cast for a United States president.

Just as in the past, our country will continue to experience insurmountable hurdles and hard-won victories. Obama: First African American President highlights a moment in history that has provided inspiration to many and a confirmation that America is and always will be a beacon of hope.

SHEHU BANKOLE-HAMEED is an immigrant from Nigeria who recently became a United States citizen. He works as an Information Technology consultant and is the founder of the alternative energy web site www.truecomfortzone.com. Married with three children, he lives in Naperville, Illinois.