How the Light Gets In: A Chief Inspector Gamache Novel (CD-Audio) 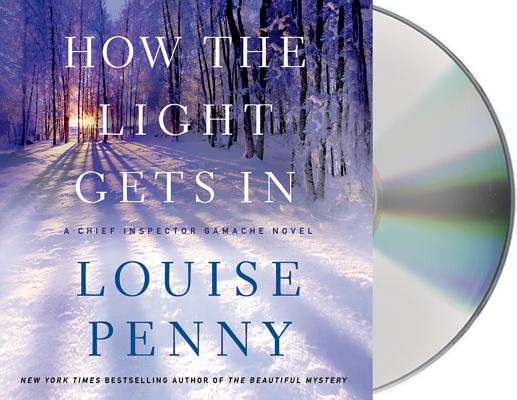 How the Light Gets In is the ninth Chief Inspector Gamache Novel from #1 New York Times bestselling author Louise Penny.

"There is a crack in everything. That's how the light gets in." —Leonard Cohen

Christmas is approaching, and in Québec it's a time of dazzling snowfalls, bright lights, and gatherings with friends in front of blazing hearths. But shadows are falling on the usually festive season for Chief Inspector Armand Gamache. Most of his best agents have left the Homicide Department, his old friend and lieutenant Jean-Guy Beauvoir hasn't spoken to him in months, and hostile forces are lining up against him. When Gamache receives a message from Myrna Landers that a longtime friend has failed to arrive for Christmas in the village of Three Pines, he welcomes the chance to get away from the city. Mystified by Myrna's reluctance to reveal her friend's name, Gamache soon discovers the missing woman was once one of the most famous people not just in North America, but in the world, and now goes unrecognized by virtually everyone except the mad, brilliant poet Ruth Zardo.

Ralph Cosham is best known as the voice behind all of Louise Penny’s bestselling Chief Inspector Gamache novels. He won the 2013 Audie Award for Louise Penny’s A Beautiful Mystery. He is a film, stage, and voice actor who narrated over 100 audiobooks, including Frankenstein, Around the World in Eighty Days, Alice in Wonderland, and Watership Down. His audiobook credits include works by C.S. Lewis, Simon Brett and C.S. Forester.  Several of his works have been awarded Audio Best of the Year by Publisher’s Weekly.

“Penny writes engagingly whether you're reading her books or listening to them. An argument for the latter is that her characters – not the least being Gamache, the gentle, brilliant, introspective and beleaguered head of the Surete division – are enriched beyond description through the distinctive voice of reader Ralph Cosham” —The Star-Ledger