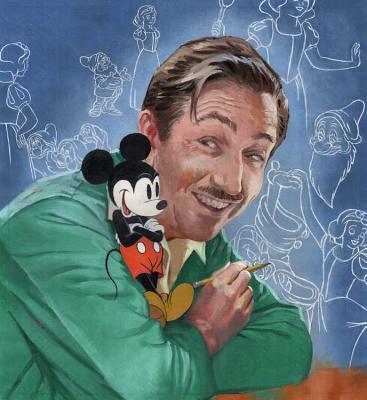 This is book number 10 in the A Big Words Book series.

An inspiring picture book biography of legendary leader in entertainment, Walt Disney, by the critically-acclaimed author of the Big Words series.

Walt Disney's name is synonymous with family entertainment. Mickey Mouse, Snow White and the Seven Dwarfs, Bambi, Disneyland, and numerous other creations have inspired generations of children the world over. From his childhood in rural Missouri to his legendary stature as a film and television icon, Walt governed his life with imagination, ingenuity, and scrupulous attention to detail. Faced with both public failures and massive success, he revolutionized the art form of animation, always seeking innovative solutions, cutting edge technology, and new ways of storytelling. Devoted to perfection, Walt was not always easy to work with, but no one can deny his profound talent and impact. Charting Walt's progression from farm boy to actor to artist, animator, director, and entertainment celebrity, Walt's own words are presented and contextualized within Doreen Rappaport's signature compelling prose. Illustrated with vivid authenticity by animator/painter John Pomeroy, this stunning entry in the award-winning Big Words series reveals a man of deep and varied passions with a constantly evolving vision, and a storyteller above all.

John Pomeroy is an animator, storyboard artist, and animation producer who began his forty-four-year career at Walt Disney Studios in 1973. He has worked on The Many Adventures of Winnie the Pooh, The Rescuers, Pete's Dragon, The Secret of NIMH, An American Tail, The Land Before Time, Pocahontas, Atlantis: The Lost Empire, Curious George, Planes, and Disney Junior's Sofia the First. He is also a painter of portraits and military history. He lives with his wife, Cami, and their family in Brentwood, Tennessee. Visit John online at www.johnpomeroy.com.

“Walt Disney may be a household name, but readers may be surprised to learn of the man behind the franchise. Rappaport introduces him as a child who found a reprieve from difficult family circumstances through performance and art. At 16, Disney joined the Red Cross and used his earnings to create his own animation studio; eventually, focus, determination, and ‘a mouse named Mickey’ led to Disney’s success. Readers well versed in early Disney cartoons will recognize familiar characters in Pomeroy’s art—he uses a rich, painterly style to convey moments from Disney’s life and legacy. Setbacks, including an animators’ strike and the onset of WWII, are offset by pivotal events, such as the planning and development of Disneyland. Readers may be particularly intrigued by details relating to the assiduous work of early animation.”—Publishers Weekly