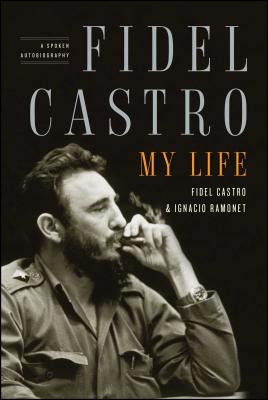 The intimate and highly revealing life story of the world’s longest-serving, most charismatic, and controversial head of state in modern times.

Fidel Castro was a dictatorial pariah to some and a hero and inspiration for many of the world's poor, defiantly charting an independent and revolutionary path for Cuba over nearly half a century. Numerous attempts were made to get Castro to tell his own story. But only in the twilight of his years was he prepared to set out the details of his remarkable biography for the world to read before his death in 2016. This book is nothing less than his living testament.

In these pages, Castro narrates a compelling chronicle that spans the harshness of his elementary school teachers; the early failures of the revolution; his intense comradeship with Che Guevara and their astonishing, against-all-odds victory over the dictator Batista; the Cuban perspective on the Bay of Pigs and the ensuing missile crisis; the active role of Cuba in African independence movements (especially its large military involvement in fighting apartheid South Africa in Angola); his relations with prominent public figures such as Boris Yeltsin, Pope John Paul II, and Saddam Hussein; and his dealings with no less than ten successive American presidents, from Eisenhower to George W. Bush.

Castro talks proudly of increasing life expectancy in Cuba; of the half million students in Cuban universities; and of the training of seventy thousand Cuban doctors nearly half of whom work abroad, assisting the poor in Africa, Asia, and Latin America. He confronts a number of thorny issues, including democracy and human rights, discrimination toward homosexuals, and the presence of the death penalty on Cuban statute books. Along the way he shares intimacies about more personal matters: the benevolent strictness of his father, his successful attempt to give up cigars, his love of Ernest Hemingway's novels, and his calculation that by not shaving he saves up to ten working days each year.

Drawing on more than one hundred hours of interviews with Ignacio Ramonet, a knowledgeable and trusted interlocutor, this spoken autobiography will stand as the definitive record of an extraordinary life lived in turbulent times.

Ignacio Ramonet is editor of Le Monde diplomatique. He is the author of Wars of the 21st Century and Geopolitics of Chaos, the founder of Media Watch Global, and a regular contributor to the Spanish daily El País.

"Genuinely thoughtful...fascinating...an engaging perspective on the man and the world he helped shape." -- Publishers Weekly

"My Life has the feeling of completeness.... Castro's personal investment in this book has also given it a stamp of authority. He has spent considerable time revising the manuscript, fact-checking information with comrades and adding material he felt important to his legacy." -- The Nation