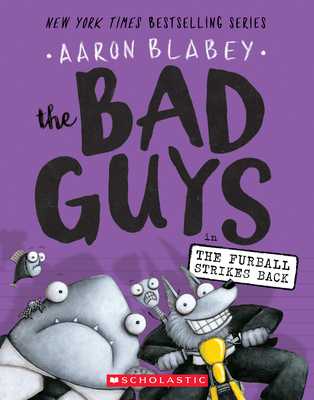 This is book number 3 in the The Bad Guys series.

NOW A MAJOR MOTION PICTURE!"I wish I'd had these books as a kid. Hilarious!" -- Dav Pilkey, creator of Captain Underpants and Dog ManThey may look like Bad Guys, but these wannabe heroes are doing good deeds...whether you like it or not! This New York Times bestselling illustrated series is perfect for fans of Dog Man and Captain Underpants.The Bad Guys are about to have a very BAD day!Mr. Wolf and his bad buddies have messed with the wrong guinea pig -- one who is secretly an evil mad scientist. And the nasty little furball wants revenge! Will they survive? Will they be heroes? And will they ever stop trying to eat each other?!?It's time for the Bad Guys to spring into action!

AARON BLABEY has written many well-loved, bestselling books for children. He is the creator of three hugely successful series for children — the New York Times bestselling The Bad Guys (Les méchants), Pig the Pug (Carlos le carlin), and Thelma the Unicorn (Thelma la licorne). The Bad Guys movie released in 2022. It was produced by DreamWorks Animation with Aaron serving as an executive producer on the project.

Praise for The Bad Guys:* "[T]his book instantly joins the classic ranks of Captain Underpants and The Stinky Cheese Man. We challenge anyone to read this and keep a straight face." -- Kirkus Reviews, starred review

Praise for The Bad Guys:* "[T]his book instantly joins the classic ranks of Captain Underpants and The Stinky Cheese Man. We challenge anyone to read this and keep a straight face." -- Kirkus Reviews, starred review