The British in India: A Social History of the Raj (Paperback) 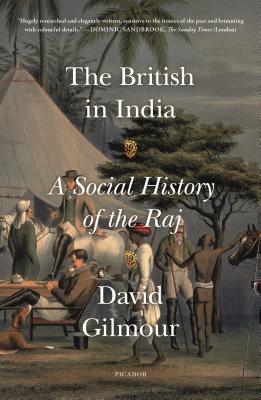 An immersive portrait of the lives of the British in India, from the seventeenth century to Independence

Who of the British went to India, and why? We know about Kipling and Forster, Orwell and Scott, but what of the youthful forestry official, the enterprising boxwallah, the fervid missionary? What motivated them to travel halfway around the globe, what lives did they lead when they got there, and what did they think about it all?

Full of spirited, illuminating anecdotes drawn from long-forgotten memoirs, correspondence, and government documents, The British in India weaves a rich tapestry of the everyday experiences of the Britons who found themselves in “the jewel in the crown” of the British Empire. David Gilmour captures the substance and texture of their work, home, and social lives, and illustrates how these transformed across the several centuries of British presence and rule in the subcontinent, from the East India Company’s first trading station in 1615 to the twilight of the Raj and Partition and Independence in 1947. He takes us through remote hill stations, bustling coastal ports, opulent palaces, regimented cantonments, and dense jungles, revealing the country as seen through British eyes, and wittily reveling in all the particular concerns and contradictions that were a consequence of that limited perspective. The British in India is a breathtaking accomplishment, a vivid and balanced history written with brio, elegance, and erudition.

Sir David Gilmour is one of Britain's most admired and accomplished historical writers and biographers. His books include The Last Leopard, The Long Recessional (FSG, 2002), and The Ruling Caste (FSG, 2006).

"Dazzling . . . Gilmour’s command of detail is both scholarly and endlessly engaging . . . The result is a complex vision of the colonial era that feels both immediate and distinctly new." —The New Yorker

"Hugely researched and elegantly written, sensitive to the ironies of the past and brimming with colourful details." —Dominic Sandbrook, Sunday Times (UK)

"The British in India is an exceptional book . . . David Gilmour’s canvas is British India and he provides the answers in a penetrating and vivid portrait of the British men and women who ran the show from the mid-18th century to 1947. Gilmour writes with wit, detachment and grace. The range of his research is impressive . . . The British in India is a wonderful memorial to the men and women whose legacy is the administrative, legal and educational framework of today’s India." —Lawrence James, The Times (UK)

"[The British in India] is the best kind of history: meticulously researched, elegantly and entertainingly written, and as wide in its sympathies as it is long in its reach." —Peter Parker, Spectator (UK)

"David Gilmour, in his highly readable social history The British in India, … takes apart diaries, memoirs and piles of ribbon-bound letters and creates a fluid narrative detailing how the civilians and soldiers, memsahibs and missionaries, planters and box-wallahs, “pig-stickers” and prostitutes lived, loved and died in a strange, faraway and at times hostile land . . .The narrative is studded with nuggets that illuminate the relationship between Britain and the sub-continent . . . A magisterial work." —Navtej Sarna, Financial Times

"This impressive book from David Gilmour, an old hand at Raj history, describes this tribe of British conquerors, administrators and merchants who lived in India from shortly after the death of Elizabeth I until well into the reign of Elizabeth II . . . This is a rich and nuanced social history that does not treat every British footstep on the subcontinent as if it were a step on the way to the Amritsar massacre. That does not make it an imperial whitewash." —Jad Adams, New Statesman (UK)