What Truth Sounds Like: Robert F. Kennedy, James Baldwin, and Our Unfinished Conversation About Race in America (Hardcover) 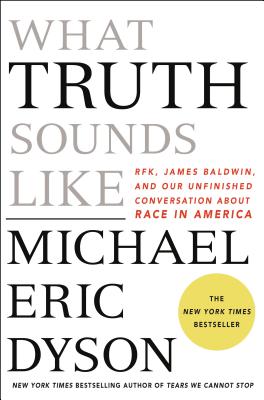 Named a 2018 Notable Work of Nonfiction by The Washington Post

Joy-Ann Reid: A work of searing prose and seminal brilliance... Dyson takes that once in a lifetime conversation between black excellence and pain and the white heroic narrative, and drives it right into the heart of our current politics and culture, leaving the reader reeling and reckoning."

President Barack Obama: "Everybody who speaks after Michael Eric Dyson pales in comparison.”

In 2015 BLM activist Julius Jones confronted Presidential candidate Hillary Clinton with an urgent query: “What in your heart has changed that’s going to change the direction of this country?” “I don’t believe you just change hearts,” she protested. “I believe you change laws.”

The fraught conflict between conscience and politics – between morality and power – in addressing race hardly began with Clinton. An electrifying and traumatic encounter in the sixties crystallized these furious disputes.

In 1963 Attorney General Robert Kennedy sought out James Baldwin to explain the rage that threatened to engulf black America. Baldwin brought along some friends, including playwright Lorraine Hansberry, psychologist Kenneth Clark, and a valiant activist, Jerome Smith. It was Smith’s relentless, unfiltered fury that set Kennedy on his heels, reducing him to sullen silence.

Kennedy walked away from the nearly three-hour meeting angry – that the black folk assembled didn’t understand politics, and that they weren’t as easy to talk to as Martin Luther King. But especially that they were more interested in witness than policy. But Kennedy’s anger quickly gave way to empathy, especially for Smith. “I guess if I were in his shoes…I might feel differently about this country.” Kennedy set about changing policy – the meeting having transformed his thinking in fundamental ways.

There was more: every big argument about race that persists to this day got a hearing in that room. Smith declaring that he’d never fight for his country given its racist tendencies, and Kennedy being appalled at such lack of patriotism, tracks the disdain for black dissent in our own time. His belief that black folk were ungrateful for the Kennedys’ efforts to make things better shows up in our day as the charge that black folk wallow in the politics of ingratitude and victimhood. The contributions of black queer folk to racial progress still cause a stir. BLM has been accused of harboring a covert queer agenda. The immigrant experience, like that of Kennedy – versus the racial experience of Baldwin – is a cudgel to excoriate black folk for lacking hustle and ingenuity. The questioning of whether folk who are interracially partnered can authentically communicate black interests persists. And we grapple still with the responsibility of black intellectuals and artists to bring about social change.

What Truth Sounds Like exists at the tense intersection of the conflict between politics and prophecy – of whether we embrace political resolution or moral redemption to fix our fractured racial landscape. The future of race and democracy hang in the balance.

“Passionately written...Dyson's larger purpose is to reflect on the relevance of the dynamic it represented — speaking truth to power — in the current racial and political climate. Singling out the cultural types represented in Baldwin’s delegation — artists, intellectuals and activists — Dyson devotes individual chapters to how examples of each bear witness to black struggle today. When it comes to artists (and athletes), Dyson invokes a sometimes dizzying array of pop-culture stars and phenomena, from Jay-Z and Beyoncé, to LeBron James and Colin Kaepernick, to “Hamilton” and “Black Panther.” —The Washington Post

"[An] exploration of persistent questions about race that appear today, starting with a 1963 meeting between Attorney General Robert Kennedy and black activists, including James Baldwin." —Texarkana Gazette

"Dyson’s much-recommended work puts forth the artists and activists who continue to celebrate blackness, offering a welcome reminder of the power of art to maintain dialog with and within America." —Library Journal

"A moving ode to the potentiality of American social progress.” —Booklist, starred review

“[A]n incisive look at the roles of politicians, artists, intellectuals, and activists in confronting racial injustice and effecting change. An eloquent response to an urgent—and still-unresolved—dilemma.“ —Kirkus Reviews

“Michael Eric Dyson has finally written the book I always wanted to read. I had the privilege of attending the meeting he has insightfully written about, and it’s as if he were a fly on the wall. Not only does he capture the spirit and substance of our gathering, but he brilliantly teases out the implications of that historic encounter for us today. What Truth Sounds Like is a tour de force of intellectual history and cultural analysis, a poetically written work that calls on all of us to get back in that room and to resolve the racial crises we confronted more than fifty years ago.” —Harry Belafonte

"Dyson has produced a work of searing prose and seminal brilliance; a conversation that starts in a tony Manhattan apartment in 1963, where legendary black thinkers and performers confront race in the rawest terms with Bobby Kennedy, who stands in for a white America forced to lose its innocence and confront its demons. Dyson takes that once in a lifetime conversation between black excellence and pain and the white heroic narrative, and drives it right into the heart of our current politics and culture, leaving the reader reeling and reckoning. An essential book for anyone who cares about racial redemption in America." —Joy-Ann Reid, MSNBC anchor and author of Fracture: Barack Obama, the Clintons, and the Racial Divide

“Dyson masterfully refracts our present racial conflagration through a subtle reading of one of the most consequential meetings about race to ever take place. In so doing, he reminds us that Black artists and intellectuals bear an awesome responsibility to speak truth to power." —Robin D. G. Kelley, author of Freedom Dreams: The Black Radical Imagination

"Anguish and hurt throb in every word of Michael Eric Dyson's Tears We Cannot Stop...It is eloquent, righteous, and inspired...Often lyrical, Tears is not...without indignation...brilliance and rectitude." —The Philadelphia Inquirer

"Dyson...creates a sermon unlike any we've heard or read, and it's right on time...an unapologetically bold plea for America to own up to its inexplicable identity anxiety." —Essence

"[Dyson's] narrative voice carries a deeper and more intimate authority, as it grows from his own experience as a black man in America — from being beaten by his father to being profiled by the police to dealing with his brother's long-term incarceration...Dyson's raw honesty and self-revelation enables him to confront his white audience and reach out to them." —The Chicago Tribune

"Be ready to pause nearly every other sentence, absorb what is said, and prepare for action. Tears We Cannot Stop is meant to change your thinking." —The Miami Times

"[Tears We Cannot Stop] talks directly to you, about issues deep, disturbing, and urgently in need of being faced." —Philly.com

“One of the most frank and searing discussions on race ... a deeply serious, urgent book, which should take its place in the tradition of Baldwin's The Fire Next Time and King's Why We Can't Wait. —The New York Times Book Review (Editor's Choice)

“Dyson lays bare our conscience, then offers redemption through our potential change.” —Booklist

"If you read Michael Eric Dyson’s New York Times op-ed piece "Death in Black and White," then you know what a powerful work of cultural analysis his book, Tears We Cannot Stop: A Sermon to White America is going to be. At a time when everyone needs to speak more openly, honestly, and critically about the racial divisions that have been allowed to grow in the United States, Dyson’s book — available in January — could not be a more welcome read." —Bustle

"A hard-hitting sermon on the racial divide... The readership Dyson addresses may not fully be convinced, but it can hardly remain unmoved." —Kirkus Reviews (Starred)

"Michael Eric Dyson is alive to the fierce urgency of now and yet he's full of felicitous contradictions: an intellectual who won't talk down to anyone; a man of God who eschews piousness; a truth-teller who is not afraid of doubt or nuance; a fighter whose arguments, though always to the point, are never ad hominem. We can and should be thankful we have a writer like Michael Eric Dyson is our midst." —Dave Eggers, from the preface of Can You Hear Me Now?