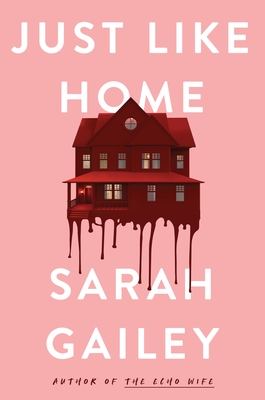 “Just Like Home grabs you and doesn’t let go. Vera returns to the home where her father committed a series of gruesome crimes. With her dying mother in a hostile small town, Vera grapples with her past — and something moving under her bed.”
— Jo Swenson, Gibson's Bookstore, Concord, NH

Just Like Home is a darkly gothic thriller from nationally bestselling author Sarah Gailey, perfect for fans of Netflix's The Haunting of Hill House as well as HBO's true crime masterpiece I'll Be Gone in the Dark.

“Come home.” Vera’s mother called and Vera obeyed. In spite of their long estrangement, in spite of the memories — she's come back to the home of a serial killer. Back to face the love she had for her father and the bodies he buried there, beneath the house he'd built for his family.

Coming home is hard enough for Vera, and to make things worse, she and her mother aren’t alone. A parasitic artist has moved into the guest house out back and is slowly stripping Vera’s childhood for spare parts. He insists that he isn’t the one leaving notes around the house in her father’s handwriting… but who else could it possibly be?

There are secrets yet undiscovered in the foundations of the notorious Crowder House. Vera must face them and find out for herself just how deep the rot goes.

Hugo Award-winning and bestselling author Sarah Gailey is the author of the novels The Echo Wife and Magic for Liars. Their nonfiction has been published by Mashable and The Boston Globe, and they won a Hugo Award for Best Fan Writer. Their fiction credits also include Vice and The Atlantic. Their debut novella, River of Teeth, was a 2018 finalist for both the Hugo and Nebula Awards.

"Gailey’s newest gothic novel is painfully suspenseful and richly dark, their rushing, intoxicating writing in peak form. Delightfully creepy and heartbreakingly tragic, Just Like Home is equal parts raw terror of a dark childhood bedroom, creeping revelations of a true-crime podcast, and searing hurt of resentment within a family. It’s a must-read for all gothic horror fans." —Booklist, starred review

Praise for The Echo Wife:
"For those familiar with Gailey's work, expect this one to offer familiar pleasures and some new surprises. And for those who aren't, well, get ready." —Entertainment Weekly

"Creepy, exhilarating science fiction... A series of dark reveals that leave both the characters and the audience reeling. Readers won't want to put this one down." —Publisher's Weekly

Praise for Magic for Liars

“The sharpest female protagonist of the summer”—The Mary Sue

“A queerer, older, quicker-paced Harry Potter, concerned with the childhood grudges that adults can't get over.”—Refinery 29

“Veronica Mars with a bit of Harry Potter” —The Nerd Daily