Nine Days: The Race to Save Martin Luther King Jr.'s Life and Win the 1960 Election (Hardcover) 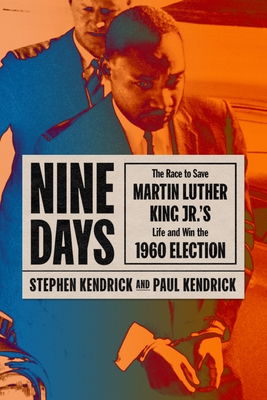 "[An] inspiring book about the events leading up to the 1960 election, from Dr. King's imprisonment to student activism in Atlanta to JFK's campaign. It's a story we can all learn from—a story of overlooked heroes and the power each of us has to create change." —Barack Obama

The authors of Douglass and Lincoln present fully for the first time the story of Martin Luther King, Jr.’s imprisonment in the days leading up to the 1960 presidential election and the efforts of three of John F. Kennedy’s civil rights staffers who went rogue to free him—a move that changed the face of the Democratic Party and propelled Kennedy to the White House.

Less than three weeks before the 1960 presidential election, thirty-one-year-old Martin Luther King, Jr. was arrested at a sit-in at Rich’s Department Store in Atlanta. That day would lead to the first night King had ever spent in jail—and the time that King’s family most feared for his life.

An earlier, minor traffic ticket served as a pretext for keeping King locked up, and later for a harrowing nighttime transfer to Reidsville, the notorious Georgia state prison where Black inmates worked on chain gangs overseen by violent white guards. While King’s imprisonment was decried as a moral scandal in some quarters and celebrated in others, for the two presidential candidates—John F. Kennedy and Richard Nixon—it was the ultimate October surprise: an emerging and controversial civil rights leader was languishing behind bars, and the two campaigns raced to decide whether, and how, to respond.

Stephen and Paul Kendrick’s Nine Days tells the incredible story of what happened next. In 1960, the Civil Rights Movement was growing increasingly inventive and energized while white politicians favored the corrosive tactics of silence and stalling—but an audacious team in the Kennedy campaign’s Civil Rights Section (CRS) decided to act. In an election when Black voters seemed poised to split their votes between the candidates, the CRS convinced Kennedy to agitate for King’s release, sometimes even going behind his back in their quest to secure his freedom. Over the course of nine extraordinary October days, the leaders of the CRS—pioneering Black journalist Louis Martin, future Pennsylvania senator Harris Wofford, and Sargent Shriver, the founder of the Peace Corps—worked to tilt a tight election in Kennedy’s favor and bring about a revolution in party affiliation whose consequences are still integral to the practice of politics today.

Based on fresh interviews, newspaper accounts, and extensive archival research, Nine Days is the first full recounting of an event that changed the course of one of the closest elections in American history. Much more than a political thriller, it is also the story of the first time King refused bail and came to terms with the dangerous course of his mission to change a nation. At once a story of electoral machinations, moral courage, and, ultimately, the triumph of a future president’s better angels, Nine Days is a gripping tale with important lessons for our own time.

Paul Kendrick is a writer whose work has appeared in The New York Times, The Washington Post, USA Today, American Heritage, Talking Points Memo, and Huffington Post. He has coauthored with Stephen Kendrick Douglass and Lincoln: How a Revolutionary Black Leader and a Reluctant Liberator Struggled to End Slavery and Save the Union and Sarah’s Long Walk: The Free Blacks of Boston and How Their Struggle for Equality Changed America.

Stephen Kendrick is the author of Holy Clues: The Gospel According to Sherlock Holmes and Night Watch (a novel). His work has appeared in The New York Times, The Washington Post, The Boston Globe, The Hartford Current, American Heritage, Huffington Post, and Utne Reader. He has coauthored with Paul Kendrick Douglass and Lincoln: How a Revolutionary Black Leader and a Reluctant Liberator Struggled to End Slavery and Save the Union and Sarah’s Long Walk: The Free Blacks of Boston and How Their Struggle for Equality Changed America.

"Compelling . . . No brief review can do full justice to the Kendricks’ masterly and often riveting account of King’s ordeal and the 1960 'October Surprise' that may have altered the course of modern American political history. Suffice it to say that any reader who navigates the many twists and turns and surprises in this complex tale will come away recognizing the power of historical contingency." —Raymond Arsenault, The New York Times Book Review

"An enthralling story, not least because it brings together such an extraordinary and era-defining dramatis personae . . . With a galloping pace and fly-on-the-wall detail, [Stephen and Paul Kendrick] chronicle the nine days of the crisis, from King’s arrest on Oct. 19, 1960, during a sit-in protest at Rich’s department store in Atlanta to his release from the notorious Georgia State Prison at Reidsville in the run-up to the November election . . . [Nine Days] is rich in detail and ripe with cinematic potential." —Nick Bryant, The Washington Post

"[An] enlightening and captivating work . . . [Nine Days] tells a fascinating if largely overlooked chapter in recent American history . . . This book tackles not only a story that resonates loudly in our current times as a thoughtful examination of the tricky relationship between race and politics, it features people courageous to the point of heroism . . . [Stephen Kendrick and Paul Kendrick] have done impeccable research and have a narrative flair worthy of a great political thriller." —Rick Kogan, Chicago Tribune

"In this brilliant, gripping work of reportage, a team of civil rights historians reexamine the nine-day period during which Reverend King remained in prison, talking to survivors of the period who were working to free him, and to family members who knew how hard it was for him to face down his fear of solitary confinement . . . King's transcendent ability to keep his eyes on the prize is one theme of this work, but the authors also find many other heroes in this story—more evidence that it takes a village." —O magazine

"[A] tale that you won't want to stop reading . . . This is the kind of book you can't help but love." —Terri Schlichenmeyer, The Philadelphia Tribune

"An engaging and informative account of [a] pivotal moment in race relations and politics in the United States . . . The authors make a compelling case that African American voters put John F. Kennedy in the White House." —Glenn C. Altschuler, Pittsburgh Post-Gazette

"Probing . . . King is shown in an unusually intimate and human light—hesitant, fearful, unhappily girding himself for the ordeal of prison. The result is a revealing take on a watershed moment in American politics and in King’s personal journey." —Publishers Weekly

"This engrossing book about the events following Martin Luther King's imprisonment on the eve of the 1960 presidential election reveals the remarkable confluence of moral courage and shrewd political calculation that changed the course of American history. I decided to take a peek and then spent the rest of the day reading the entire book. A fascinating telling of a story that more people should know about." —Dr. Clayborne Carson, editor of the King Papers Project and The Autobiography of Martin Luther King, Jr., and professor and founding director of the King Research and Education Institute at Stanford University

“Students in the Atlanta sit-in movement could not have foreseen how our actions would set the events in this book in motion. Nine Days is a detailed retelling of an episode in Civil Rights and American history that still reverberates today.” —Marian Wright Edelman, founder and president emerita, Children's Defense Fund

"You can't comprehend Martin Luther King Jr.'s place in the civil rights crusade—or Jack Kennedy's razor-thin win over Dick Nixon in 1960—without understanding King's jailing just before the election. And you can't grasp the resonance of those nine long days and nights without reading (and relishing) Stephen and Paul Kendrick's extraordinary book." —Larry Tye, author of Bobby Kennedy: The Making of a Liberal Icon and Demagogue: The Life and Long Shadow of Senator Joe McCarthy

"Stephen and Paul Kendrick have written a phenomenal work that will live beyond our time and space. Nine Days is urgent, relevant, and historically accurate. I only wish some of my dear civil rights movement friends who have passed on could read this book's recounting of the history we made." —Reverend Otis Moss Jr., Atlanta Student Movement veteran and civil rights leader

"You can’t fully understand the Civil Rights Movement without knowing this story. Sometimes a lot happens in a short time. Such was the case in 1960 with John Kennedy and Dr. Martin Luther King. What happened in those nine days showed courage and conviction from both men as well as from countless others who put their lives on the line for their ideals and now this well researched and written book tells us all." —Senator Bill Bradley