The Sea and Civilization: A Maritime History of the World (Paperback) 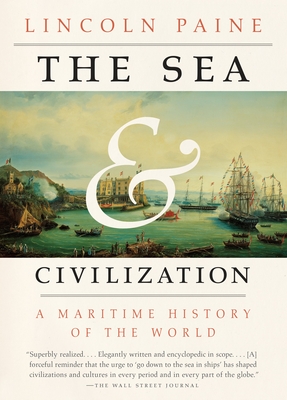 A monumental retelling of world history through the lens of the sea—revealing in breathtaking depth how people first came into contact with one another by ocean and river, lake and stream, and how goods, languages, religions, and entire cultures spread across and along the world’s waterways, bringing together civilizations and defining what makes us most human. The Sea and Civilization is a mesmerizing, rhapsodic narrative of maritime enterprise, from the origins of long-distance migration to the great seafaring cultures of antiquity; from Song Dynasty human-powered paddle-boats to aircraft carriers and container ships. Lincoln Paine takes the reader on an intellectual adventure casting the world in a new light, in which the sea reigns supreme. Above all, Paine makes clear how the rise and fall of civilizations can be linked to the sea. An accomplishment of both great sweep and illuminating detail, The Sea and Civilization is a stunning work of history.

Lincoln Paine is the author of five books and more than fifty articles, reviews, and lectures on various aspects of maritime history. He lives in Portland, Maine, with his wife, Allison.

“Superbly realized. . . . Elegantly written and encyclopedic in scope. [A] forceful reminder that the urge to ‘go down to the sea in ships’ has shaped civilizations and cultures in every period and in every part of the globe.” —The Wall Street Journal

“The Sea and Civilization is, without doubt, the most comprehensive maritime history ever produced. . . . An all-consuming vision oozes from Paine’s book. His passion is to tell the story of the sea. History is seldom written with that kind of passion today.” —The Times (London)

“Here is a story told with assurance and a refreshing perspective. . . . A bracing journey.” —The Dallas Morning News

“Fascinating and beautifully written. . . . An eloquent vision of how the sea served as a path to the modern world.” —Foreign Affairs

“Paine is full of such illuminating facts. . . . [He] forestalls any western bias with excellent chapters on Asian expansion. . . . ‘The sea held no promise for slaves, coolies, indentured servants, or the dispossessed,’ Paine reminds us, and while it is ‘fickle and unforgiving, it is a fragile environment susceptible to human depredation on a scale unimaginable to our ancestors.’ And yet, whose heart does not sing out when they see the sea? Our last resort, it still holds its promise and its power.” —New Statesman (London)

“A magnificently sweeping world history that takes us from the people of Oceania and concludes with the container. In contrast to most books on maritime history, the majority of The Sea and Civilization covers the history of the world before Columbus sailed the ocean blue and at least as much of the narrative focuses on Asia as it does on Europe.” —The Telegraph (London)

“An ambitious work. . . . Dense with facts and rich in detail that tells mankind’s story from the perspective of our relation to the seas—as well as lakes, rivers and canals.” —Asian Review of Books

“Brilliantly realized. . . . we have at last a responsible and persuasive explanation of the inextricable connection between the ocean and world civilization.” —Peter Neill, World Ocean Observatory

“Takes the reader through history via the seas . . . Paine’s highly detailed work encompasses a wide array of topics, from trade and the influence of the sea on warfare and political coalitions, to ship building techniques through the ages, to piracy and slavery.  . . . Paine has compiled an invaluable resource for salty dogs and land-lubbers alike.” —Publishers Weekly, starred review

“Paine deftly navigates the complexities of global culture to create an eminently readable account of mankind’s relationship to the sea. Both profound and amusing, this will be a standard source for decades to come.” —Josh Smith, U.S. Merchant Marine Academy, editor of Voyages

“The Sea and Civilization presents a fresh look at the global past. Bringing to bear a formidable knowledge of ships and sails, winds and currents, navigation techniques and maritime law, Lincoln Paine offers a lively tour of world history as seen from the waterline. The result is a fascinating account, full of little-known episodes and novel insights. A major contribution.”  —Kären Wigen, Stanford University, author of A Malleable Map

"Paine's a lyrical stylist, and the breadth of his historical vision is extraordinary." —David Mitchell, GQ