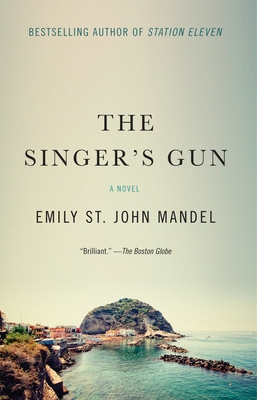 “Emily St. John Mandel's second novel proves that she is a writer to watch out for. Anton Waker wants out of the life of corruption in which he grew up. Unfortunately, it isn't an easy thing to shake. Elena, a college drop-out in the U.S. illegally, wants never to return to her isolated hometown again. These two form a love based on half-truths and outright lies. This is a novel of suspense, mystery, and international intrigue, a tale of family loyalties and the daunting price that some must pay for their independence.”
— Joe Eichman, Tattered Cover Bookstore, Denver, CO

From the award-winning, bestselling author of Station Eleven and The Glass Hotel, “a gripping story, full of moral ambiguities, where deception and betrayal become the norm, and where the expression ‘a riddle wrapped in a mystery, inside an enigma’ is lifted to new heights” (St. Louis Post-Dispatch).

Everyone Anton Waker grew up with is corrupt. His parents dealt in stolen goods, and he was a successful purveyor of forged documents until he abandoned it all in his early twenties, determined to live a normal life, complete with career, apartment, and a fiancée who knows nothing of his criminal beginnings. He’s on the verge of finally getting married when Aria—his cousin and former partner in crime—blackmails him into helping her with one last job.

Anton considers the task a small price for future freedom. But as he sets off for an Italian honeymoon, it soon becomes clear that the ghosts of his past can't be left behind so easily, and that the task Aria requires will cost him more than he could ever imagine.

EMILY ST. JOHN MANDEL's five previous novels include The Glass Hotel and Station Eleven, which was a finalist for a National Book Award and the PEN/Faulkner Award for Fiction and has been translated into thirty-two languages. She lives in New York City with her husband and daughter.

“A gripping story, full of moral ambiguities, where deception and betrayal become the norm, and where the expression ‘ a riddle wrapped in a mystery, inside an enigma’ is lifted to new heights.” —St. Louis Post-Dispatch

“Big in concept, flawless in tone, The Singer’s Gun is a tender and astounding tour de force.” —Mystery Scene

“A nail-biting thriller overflowing with high-stakes issues such as blackmail, theft, fraud and human trafficking.” —BookPage

“Mandel’s second novel is an extraordinarily written meditation on identity, chance and choice. . . . Nothing short of breathtaking.” —The Howard County Times