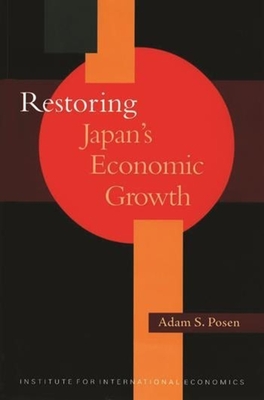 By Adam Posen
Email or call for price

Will the Japanese government take the decisive but manageable policy actions needed to bring about economic recovery? Despite claims to the contrary, macroeconomic expansion has yet to be seriously tried in Japan. Criticism of current Japanese macroeconomic and financial policies is so widespread that the reasons for it are assumed to be self-evident. In this volume, Adam Posen explains in depth why a shift in Japanese fiscal and monetary policies, as well as financial reform, would be in Japan's own self-interest. He demonstrates that Japanese economic stagnation in the 1990s is the result of mistaken fiscal austerity and financial laissez-faire rather than any supposed structural failures of the "Japan Model." The author outlines a program for putting the country back on the path to solid economic growth--primarily through permanent tax cuts and monetary stabilization--and draws broader lessons to be learned from the recent Japanese policy actions that led to the country's continuing stagnation. The book will be a useful supplementary text for both undergraduate and postgraduate courses in macroeconomics, comparative political economy, Japan or East Asian studies, public finance, and international relations.

Dr. Posen, the President of the Peterson Institute for International Economics, has specialized in macroeconomic and monetary policy, resolution of financial crises, central banking issues, and the economies of Western Europe, Japan, and the United States. Dr. Posen brings a distinctively global perspective to macroeconomic policy analysis and forecasting. He has written about the financial and economic challenges faced by the European Union following the adoption of the euro and the lasting impact of Japan's economic crisis of the 1990s, while providing counsel directly to the Japanese government in Tokyo. Leading up to the successful London G-20 summit of 2009 during the global financial crisis, he consulted for the UK Cabinet Office.