Studies on the Abuse and Decline of Reason: Text and Documents (Collected Works of F. A. Hayek) (Paperback) 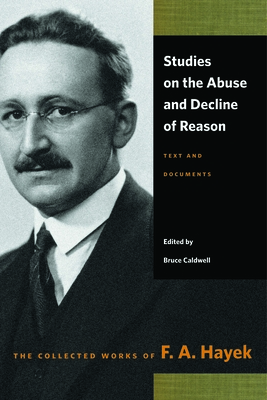 F. A. Hayek never published the grand project he conceived in a letter to Fritz Machlup in 1939. As described in the introduction, this work would "incorporate intellectual history, methodology, and an analysis of social problems, all aimed at shedding light on the consequences of socialism." He told Machlup that "a series of case studies should come first, . . . leading to the fundamental scientific principles of economic policy and ultimately to the consequences of socialism," and the work would "form the basis of a systematic intellectual historical investigation of the fundamental principles of the social development of the last hundred years." (Introduction, p. 1)

Studies on the Abuse and Decline of Reason collects the essays that were to be the foundation of that work. The essay "Individualism: True and False" was written as the introduction to the work. "Scientism and the Study of Society" provides the case studies, followed by two essays of intellectual history: "The Counter-Revolution of Science" (his study of the history of scientism in France) and "Comte and Hegel."

Hayek did publish all the works found in this volume, but they had never been gathered in a single work as he originally conceived. Editor Bruce Caldwell has provided translations where they were absent and has revised and corrected the text, and his introduction tells "the story of Hayek's greatest unfinished piece of work."

F. A. Hayek (1899-1992), recipient of the Medal of Freedom in 1991 and co-winner of the Nobel Memorial Prize in Economic Sciences in 1974, was a pioneer in monetary theory and one of the principal proponents of classical liberal thought in the twentieth century. He taught at the London School of Economics, the University of Chicago, and the University of Freiburg.

Bruce Caldwell is Research Professor of Economics and the Director of the Center for the History of Political Economy at Duke University. He is the current general editor of The Collected Works of F. A. Hayek.