The Iranian Revolution at Forty (Paperback) 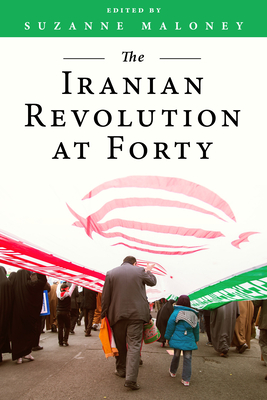 Iran's 1979 revolution is one of the most important events of the late twentieth century. The overthrow of the Western-leaning Shah and the emergence of a unique religious government reshaped Iran, dramatically shifted the balance of power in the Middle East and generated serious challenges to the global geopolitical order--challenges that continue to this day. The seizure of the U.S. Embassy in Tehran later that same year and the ensuing hostage crisis resulted in an acrimonious breach between America and Iran that remains unresolved to this day. The revolution also precipitated a calamitous war between Iran and Iraq and an expansion of the U.S. military's role in maintaining security in and around the Persian Gulf.

Forty years after the revolution, more than two dozen experts look back on the rise of the Islamic Republic and explore what the startling events of 1979 continue to mean for the volatile Middle East as well as the rest of the world. The authors explore the events of the revolution itself; whether its promises have been kept or broken; the impact of clerical rule on ordinary Iranians, especially women; the continuing antagonism with the United States; and the repercussions not only for Iran's immediate neighborhood but also for the broader Middle East.

Complete with a helpful timeline and suggestions for further reading, this book helps put the Iranian revolution in historical and geopolitical perspective, both for experts who have long studied the Middle East and for curious readers interested in fallout from the intense turmoil of four decades ago.

Suzanne Maloney is the interim vice president and director of the Foreign Policy program at the Brookings Institution. Her books include Iran's Political Economy since the Revolution and Iran's Long Reach. Maloney has advised both Republican and Democratic administrations on Iran and the Middle East and previously served as Middle East advisor for ExxonMobil Corporation. She holds a Ph.D from the Fletcher School of Law and Diplomacy at Tufts University and has studied and conducted research in Iran.